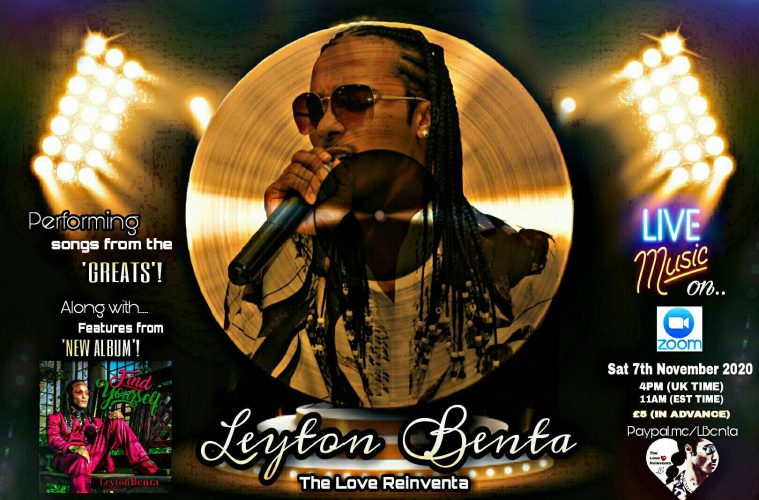 The Leyton Benta Show: Live Music for the world 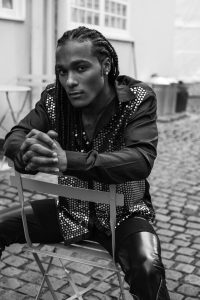 With the music industry controlled by multimillionaires who exploit Black talent.  A new crop of artists is bringing an entrepreneurial flair to their craft. Promising R&B/Soul singer, Leyton Benta recently performed two Zoom sessions online. The first show took place on August 22nd and the follow-up took place on 26th September. Speaking about his decision to perform online, Benta said

‘’Because everything was shutting down with regards to certain businesses and certain arts; I thought okay I have all the facilities, my gift my craft. I thought let me have my first private show’’.

With some innovation and foresight, Benta promoted the sessions through his website and his social media platforms. The singer released his latest official album ‘Find Yourself’ earlier this year in February. However, a month later the UK would face a national lockdown never witnessed for generations. This has created a myriad of obstacles for everyone, particularly those in the arts, Benta being no exception. ‘’I felt I needed to keep it (the album) marketed. Personally, I felt I always needed to put out something good for the world’’ said the 26-year-old.

‘’People need to hear my music; people need to feel my music. Whether they know me or not, I feel I am the hope for people to get through these crazy times’’

Leyton affirms. The initial Zoom session on the 22nd of August was £10 for viewers. ‘’I thought it is not really that much, it is reasonable. And I have a journey behind what I do. It is not just someone who has just started out’’. Despite satisfying his audience with his first performance and experimenting with the price; Leyton described the event as a ‘’trial and error’’ and subsequently decided to reduce the price to £5 for his successive performance, primarily to increase his audience. Striking the balance proved a difficult task for the 6-time award-winning artist. ‘’You have got to think about your worth at the same time’’ he argues. With the squeezing of peoples finances and recent Office for National Statistics (ONS) suggesting the unemployment rate was 4.5% between June and August compared to a 4.1%, increase during the first quarter of the year; the UK unemployment is at its worst for more than it has been for over three years. Leyton’s price deduction appears to have been a decisive and well-calculated move. The following session on September 22nd illustrated that his decision was the right course of action.  Speaking on his events Benta stated

‘’This is The Leyton Benta Show’. It is not like I am standing in for someone, this is mine and for me to be who I am and let people know about why love is a priority and why this journey should receive its recognition for what it is because I feel my journey has been overlooked for so many years now.’’

Since Nu Origins last interviewed the singer earlier this year and a previous interview, I did with him in a different publication last year; the singer’s determination to remain authentic to himself has arguably only been more emboldened than ever.  ‘’Because of my age and obviously, my message and my strong stance on who I am it really does threaten a lot of people’’ he asserts.

Except for a loyal team member in the U.S who assisted Benta with the rehearsals on zoom and his mother who would act as the host; the singer has had to wear many hats. From promoting the events, designing the flyers, ensuring he looks regal with luminous garments, to giving the audience a performance that mirrors that off a stage in concert (or at least a close call); Leyton is adamant his sessions which will be monthly from November will leave the audience mesmerized.

‘’When I give my performance off, I let people know that this is a person to make a difference timelessly. This isn’t just someone who is just there on a microphone to just entertain. This is about filming. How I bring that is through my personality’’ he insists.  ‘’It’s my heart, it’s my craft, it’s my message’’ the London born singer adds with great excitement and urgency.

One particular attendee of The Leyton Benta Show said: ‘’Leyton, I just want to take this personal time to thank you very much for sharing your hits with us on your Zoom event. I am just letting you know that it felt as if I was at an actual event seeing an actual real artist perform. You exactly transcended that on to me and to other people who watched your Zoom events. As being someone from the States, we are very specific about music and a very sure of music. I am just letting you know that I felt I needed to fly you out to the States to get you in paid events on actual stages. So, thank you very much as I felt your vocals resonated through me and other people, and please never stop because I feel that you are hope’’ – Anonymous viewer of a previous online event.

The Leyton Benta show has attracted mostly American (U.S) viewers, something that the singer is thrilled by, but he wants to increase his UK audience as well.   After the first online session on the 22nd August which saw songs performed exclusively from his latest album ‘Find Yourself’; the second event on the 26th September had much of the same, with a special acapella towards the end that dazzled the audience. Leyton’s forthcoming performance on 7th November 2020 will feature a combination of songs from ‘Find Yourself’ and covers of ‘the greats’. Wanting to keep the audience in suspense, the singer was reluctant to declare which artists he intends to cover on the day/evening.  To whet the readers’ appetite, he did reveal one artist that will be covered; Marvin Gaye.

Make sure you purchase a ticket to find out who the rest will be.  Fans will be delighted to know that Leyton will be recording a new music video for ‘Secret Heaven’ in November and the video will be released soon after. The artist said: ‘’It is going to be very cinematic, very emotional. It is going to have a blend. This is going to be a next level of Leyton Benta’’.