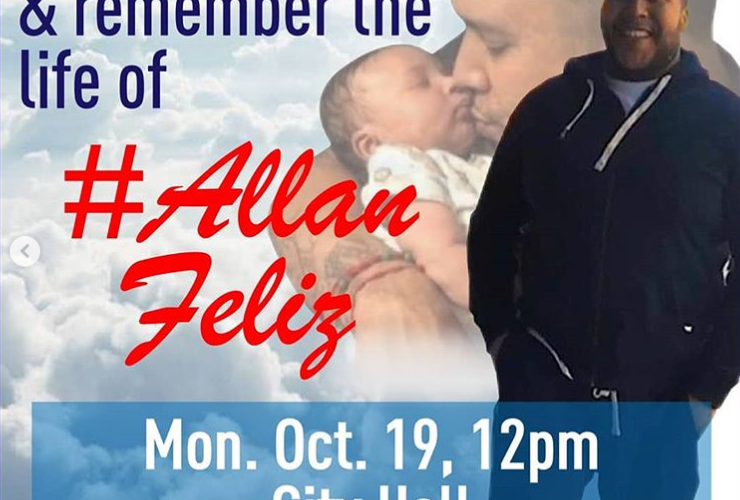 On Monday, October 19, 2020 the family of Allan Feliz, other family members of New Yorkers killed by the NYPD, elected officials, and community supporters gathered at City Hall to demand Mr. Feliz’s killers be held accountable.

#AllanFeliz was unarmed. #NYPD stopped him for a traffic violation he NOT commit. Allan should be alive. COME OUT TODAY, #CityHall, 12pm to stand with his family and demand @NYCMayor #FireNYPD who killed him.

“A year ago, Allan was racially profiled and stopped for an alleged traffic violation he did not commit, which the cops who stopped him admitted once they reached his car,” said Samy Feliz, brother of Allan Feliz. “The stop should have ended there. Instead, the two-minute interaction with NYPD Sgt. Jonathan Rivera and Officers Edward Barrett and Michelle Almanzar ended with one shot killing Allan. Today we demand Mayor de Blasio and Commissioner Dermot Shea fire the officers involved in Allan’s murder and remove killer cops from our communities.”

Two days after the one-year anniversary of Mr. Feliz’s death, family members remembered him as an active community member and loving father.

“Allan was full of life and always had a smile on his face,” said Ashley Verdeja, sister of Allan Feliz. “He was the glue to our family. He had just had his first child, his son Eli, and we want to make sure Eli knows his dad deserves justice.”

COME OUT TODAY (10/19), 12p – City Hall, Park Row side – to stand with the fam of #AllanFeliz. The facts are clear- Sgt. Rivera and Ofc. Barrett and Almanzar broke the law and NYPD protocol when they killed Allan. @nycmayor and commish Shea must #FireNYPD who killed him.

Just over a year ago, Mr. Feliz, a Washington Heights resident, was pulled over at the intersection of Bainbridge Ave. and East 211 St. in the Bronx by Sgt. Rivera and Officers Barrett and Almanzar. They alleged he was not wearing a seatbelt but bodyworn camera footage from the incidents shows them acknowledging that this was a mistake. Rather than allow Mr. Feliz to continue on his way, officers escalated the situation. After tasering and beating Allan, who was unarmed, Sgt. Rivera shot him once in the chest at close range. After Mr. Feliz was shot, Officer Barrett dragged him into the road, causing his clothing to come down, exposing his genitals. Rather than cover Mr. Feliz, they cuffed him.

Advocates slammed the de Blasio administration for yet again failing to hold officers who have unjustly taken the lives of New Yorkers accountable.

“It’s outrageous that Mayor de Blasio is forcing yet another family to take to the streets to demand accountability for their loved one’s death and making New York taxpayer shell out tens of thousands of dollars to continue to pay the salaries of the officers who killed Allan Feliz,” said Justice Committee Co-Director Loyda Colon. “Officers who start with an unjust traffic stop and escalate it to homicide are a threat to public safety and have no business patrolling our communities. Mayor de Blasio must ensure Rivera, Barrett, and Almanzar are fired immediately.”

Fight The Power with The Justice Committee Below: