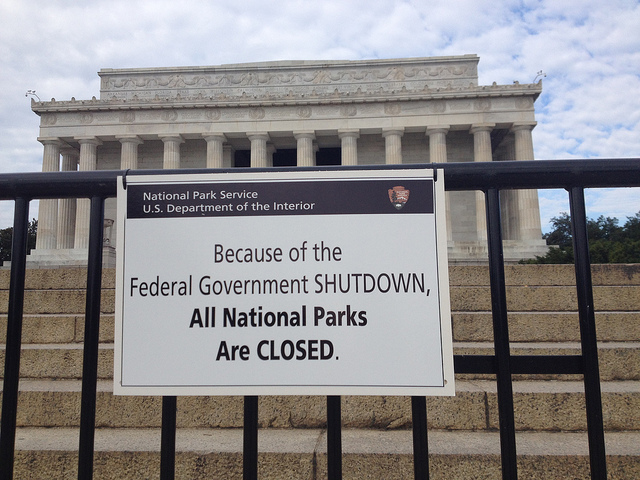 How Donald Trump’s Shutdown Trickles Down

The government dilemma is presently the second longest shutdown in history over the past 43 years. It will become the longest if the government doesn’t reopen by Saturday and there is currently no end in sight. Tuesday night, after Donald Trump’s Oval Office address, Senate minority leader, Chuck Schumer proclaimed, “We don’t govern by temper tantrum. No president should pound the table and demand he gets his way or else the government shuts down.” And yet the next afternoon, it was as if Schumer’s words had never been uttered, or at least not taken seriously.

On Wednesday, Trump fumed as he walked out of a meeting with top congressional leaders after hearing House Speaker, Nancy Pelosi’s rejection of his demands to provide funds for the border wall he has long advocated. Trump inevitably ended up on Twitter to complain of the meeting with Pelosi and Schumer. The president tweeted:

(Reportedly the President did quite actually say, “bye-bye” to Nancy Pelosi.)

In his Oval Office address, Trump only mentioned his government shutdown once and while doing so he went on to accuse the Democrats of being responsible for the shutdown. Today the battle continues amongst Trump and U.S. Congress concerning the U.S.-Mexico border wall and over the federal budget to build it. However, in the meantime, the crippling effects of an indeterminate government shutdown are hurting everyday federal employees.

Trump has yet to back down from his $5 billion border wall demands as federal personnel and House Democrats implore a swift reopening of the government. For many Americans it is easy to ignore the pain and suffering of thousands of federal employees. Our packages are still continuing on through the mail system, after all. Some airports haven’t completely slowed down in regards to TSA and it’s employees (though a number have) and courts are functioning. However, when truly evaluating the situation it is not difficult to see the shut down is having terrible ripple effect. A number of agencies and federal programs, have closed or reduced services, affecting nine out of 15 federal departments. Nearly 800,000 government employees have been financially affected over the past few weeks and they will not likely see back pay until after the shutdown is corrected, creating desperate circumstances for those living paycheck to paycheck. An estimated 2,000 subcontractors working in federal buildings, such as janitors, security guards, cafeteria workers and others are not only facing a prolonged period of absence from work, but they also won’t be compensated for this gap in time at all. For example, in the Chicago area alone, over 40 agencies commission approximately 40,000 federal employees in the area.

Our national parks have received unfortunate publicity as of lately also. Within the first two weeks of the shutdown, trash and human excrement were amassing throughout Yosemite National Park. As the shutdown began, the park attempted to remain open, dealing with limited resources, including restrooms and toilet maintenance. Without availability to the bathroom facilities, park visitors started relieving themselves outdoors, not respecting the park services orders to bury or remove their waste while in the park. As a consequence, certain park areas have been closed. Waste of all kinds has also become a problem in Joshua Tree and Pinnacles National Park in California, and at Rocky Mountain National Park in Colorado. A number of parks such as Arches and Canyonlands in Utah and Yellowstone National Park have broadcast full or partial closures. On Wednesday, the Smithsonian Institution declared that the Smithsonian museums and the National Zoo will remain closed to the public thanks to the federal shutdown. “It’s really disappointing for our public because we know so many people come to Washington with plans to visit the Smithsonian museums, which are free,” Smithsonian spokesperson Linda St. Thomas said, “And they really plan on that being a part of their visit to the city.”

State Parks aren’t singularly affected these days. The significance of the shut down for farmers could be devastating with delays from the Farm Bill and federal aid. “Illinois farmers already face enough uncertainty from Mother Nature and the president’s reckless trade war — but now, the Trump shutdown is causing even more economic stress for (agriculture) producers as they weather a struggling farm economy,” said U.S. Rep. Cheri Bustos, D-Ill., in a statement. “This may be a game of chicken for the president but this might mean the family farm for producers in Illinois.” Among the nine federal agencies that shut down on December 21, The Department of Agriculture, is promising funding for the Supplemental Nutrition Assistance Program (SNAP), through February. SNAP is currently the nation’s largest food aid program. However, afterward, everyday people who depend on the government for food and housing assistance, tax refunds or numerous other government programs could soon face challenges and the agency doesn’t have a game plan to support the more than 38 million people on the SNAP program.

The long-term effects of a prolonged shutdown may hurt the nation as a whole. Republican U.S. Senator from Kentucky, Rand Paul, claimed it actually “cost us more to shut the government down than to keep it open”. He may be right. During the government shut down of 2013, the Office of Management and Budget assessed the shutdown caused numerous causalities. Following the shutdown there were over 120,000 fewer jobs and economic growth was cut in the last quarter of 2013. $4 billion in tax refunds were postponed, the Food and Drug Administration halted the approval of drugs and medical devices and the Women, Infants, and Children nutrition program went totally unfunded. That government shutdown only lasted 16 days.

The longer the shutdown marches on, the more threatening the danger for everyday Americans, not just those employed by the U.S. government. Yet with the president and the GOP refusing to waver in regards to immigration demands and “the wall”, there is little hope the shutdown will come to a close anytime in the immediate future, especially following this week’s meeting between Trump and congressional Democrats, ending in animosity and disorder. The impacts of an extended shutdown, such as this one, are tangible and hit a number of Americans where it hurts the most: at home.