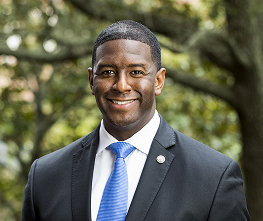 For Florida, a southern state with a history of racial tension and political close calls, Election Day gave rise to a culmination of budding hot topic issues: racial injustice and voter fraud. From the start, many would claim race played an enormous role in the remarkably tight election results. The president’s white nationalism-based support for Republican Ron DeSantis only wound up Florida residents. Multiple times, DeSantis spoke at right wing, annual David Horowitz Freedom Center conferences. Horowitz himself has made racist claims, including tweeting that African-Americans owe their freedom to white people and that the country’s “only serious race war” is against Caucasians.

Race became a key component of the campaign, on August 29th, when DeSantis said Florida voters would “monkey this up” if voters were to elect Democrat Andrew Gillum, during a televised interview with Fox News. Later in the week, DeSantis refuted the comment was an insinuation to Gillum’s race. Gillum, who would have been the state’s first black governor, would later claim an Idaho-based white supremacist group was organizing racist automated calls against Gillum across the state. The automated phone calls involved a man pretending to be Gillum, while jungle sounds and monkey noises played in the background. The call begins, “Well, hello there! I is the negro, Andrew Gillum, and I be askin’ you to make me governor of this here state of Florida.” The recording, released by The Post, goes on further making not only racists remarks but also takes an anti-Semitic turn. DeSantis’ campaign claimed to not be involved in such accusations.

On Nov. 8, as the states’ voters cast their ballots, they had no idea the long and controversial road that lay ahead. In a state with historically close polling numbers, voters and politicians alike had recognized defeat for Tallahassee Democratic Mayor Andrew Gillum against Republican Ron Desantis in the state’s race for governor. However, even after Gillum’s concession statement, many were surprised to learn a recount in the governor’s race would result, opening debate for not only political discussion of party lines and state priorities but of racial segregation and voter suppression.

Florida regulations require a necessary recount if the discrepancy in an electoral race is less than 0.5 percent, leading to an official petition for reevaluation of all ballots cast. Shortly, the recount involved three statewide contests, but hope would be dashed, as a number of faux pas would ensue statewide. The initial results of the machine recount were to be turned in with a strict 3 p.m. deadline and a federal judge’s ruling to not allow any extensions crushed Democrats’ confidence of delaying it. Two Florida counties, Palm Beach and Hillsborough were unable to officially finish their recount upon submitting results. Broward County, previously accused by President Trump as a hub of voter fraud, completed their recount on Thursday, however it was presented two minutes too late and the state refused to accept the results. If a county can’t meet the recount deadline, the former count prevails.

Conservative attempts to undermine the state-mandated recount only helped to exaggerate the troubles in the southern state. In response, President Trump declared, via Twitter, that “An honest vote is no longer possible” albeit it was Florida law that triggered the lengthy recounts for all the uncommonly tight statewide elections. Supervisor Brenda Snipes, head of Broward elections department retorted, “I don’t know where the president gets his information.”

After racist accusations, allegations of voter fraud by the head of state and evidence of voter suppression, Floridians were left feeling exhausted and without further routes to explore. The state-mandated recount of over 8 million ballots took nearly a week to conduct and showed insufficient developments in the race for governor. Republican former congressman DeSantis was still ahead by a mere 0.41 points over Gillum. Racism is still alive in 2018 and the evidence is often revealed when politicians are elected to office even after voicing racist comments or not distancing themselves from racially divisive groups. The truth can be found in the voting booth.