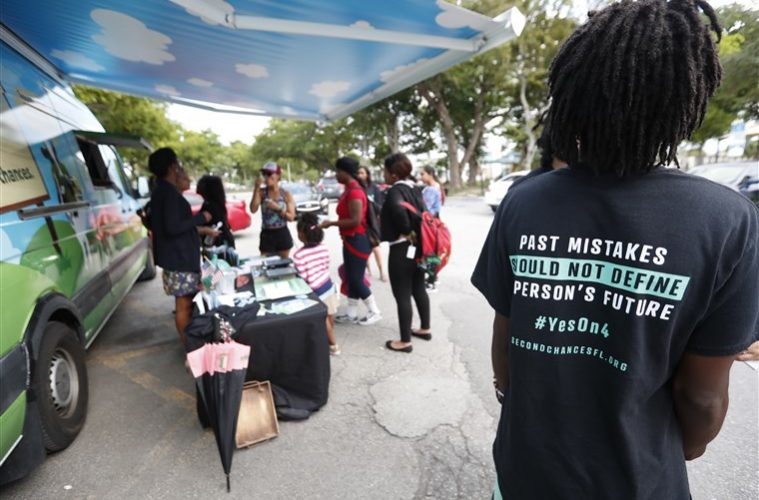 The Florida House on Wednesday passed a bill that would require felons to pay before they can vote and critics are calling it a “poll tax”.

The Miami Herald reported that the bill was passed in response to implementing Amendment 4, which was supposed to restore the right to vote to more than a million former felons. In November, voters in Florida voted “YES” on the measure. It was widely seen as a means of allowing those who served their time, many of whom are African American, a way to participate as full members of society.

However, Republicans in March introduced a bill in March that would make it harder for felons to vote. Court fines, fees, and restitution should be required before felons could cast a ballot.

Kara Gross, legislative director of the ACLU of Florida, opposed the bill. Gross said it went against what voters wanted with the constitutional amendment.

“Disturbingly, this legislation will cause defacto lifetime disenfranchisement for large swaths of formerly incarcerated individuals who have completed their sentences — precisely the opposite of the entire purpose of Amendment 4,” Gross said in a statement. “This bill merely replaces one unjust system for another.”

The dispute will now move on to the Senate where the outcome will impact 1.4 million people. Supporters of the bill have denied that the measure is disenfranchising voters. They stated that the amendment does not allow the state to require fines and fees before voting but that “all terms of their sentence including parole or probation,” which may include restitution.

“This bill does not disenfranchise anyone,” Florida Rep. James Grant (R), who introduced the bill, said.

There is also the cost of this bill as the House was considering a proposal by the Senate that would grant $2 million. It would hire more employees to the Florida Commission on Offender Review to help evaluate former felons’ voter registration applications. At the moment, Florida does not have a system to track restitution.

“Obviously, the individual is responsible for determining whether they’ve completed all the terms of their own sentence,” Sen. Jeff Brandes said. “If they have questions, they should go to local supervisors of elections.”

The 24th Amendment prohibited poll taxes, but nine states directly require people with felony convictions to repay financial obligations before they can vote again, according to a 2016 report. Sen. Cory Booker who is seeking the Democratic nomination liked this legislation to one in a tweet.