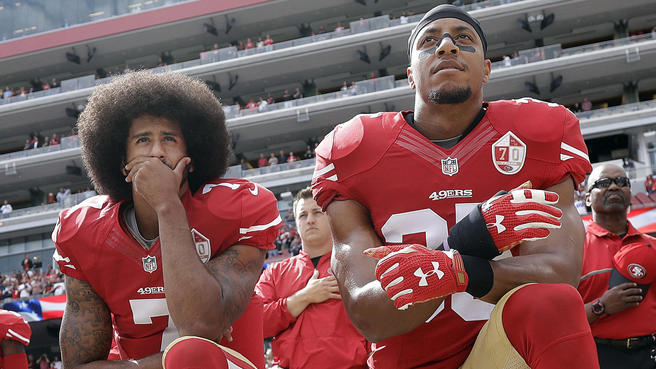 Colin Kaepernick and Eric Reid have resolved their pending lawsuit against the NFL.

On Friday, Mark Geragos and the NFL announced in a joint statement that a settlement had been reached between Former 49ers quarterback Kaepernick and safety for Carolina Panthers Reid.  Terms of the settlement will be confidential.

“For the past several months, counsel for Mr. Kaepernick and Mr. Reid have engaged in an ongoing dialogue with representatives of the NFL,” Geragos and the NFL said. “As a result of those discussions, the parties have decided to resolve the pending grievances. The resolution of this matter is subject to a confidentiality agreement so there will be no further comment by any party.”

The NFL Players Association responded that they were not aware of the details regarding the settlement, but still offered their support to the players. They were happy that Reid had a job and hopeful Kaepernick would get one as well.

“We continuously supported Colin and Eric from the start of their protests, participated with their lawyers throughout their legal proceedings and were prepared to participate in the upcoming trial in pursuit of both truth and justice for what we believe the NFL and its clubs did to them,” the statement said. “We are glad that Eric has earned a job and a new contract, and we continue to hope that Colin gets his opportunity as well.”

In 2016, Kaepernick began kneeling during the national anthem to draw attention to the plight of racism and police brutality in the country. Reid and other players joined Kaepernick in his protest. However, critics such as President Trump declared that the athletes were being disrespectful to the anthem and those serving in the military.

Kaepernick left the 49ers in march 2017 and was not signed by another team. He alleged that the league was blackballing him due to his political beliefs and filed a grievance in fall 2017 under the collective bargaining agreement alleging collusion against signing him to an NFL contract. In the suit, he claimed he was being denied employment due to his expressions of social justice. Last May, the NFLPA filed a grievance against the NFL on Reid’s behalf. They allegined that team owners and the league, influenced by Trump, colluded to prevent him from being employed due to his activism. Earlier this week, Reid received a three-year deal earlier this week worth more than $22 million with the Panthers.

NFL commissioner Roger Goodell and several owners were scheduled to be deposed later this month. Attorneys for Kaepernick requested texts from several team owners such as Dallas Cowboys’ Jerry Jones last November to prove the claims. Jones had said he wound bench any player who did not stand for the anthem.