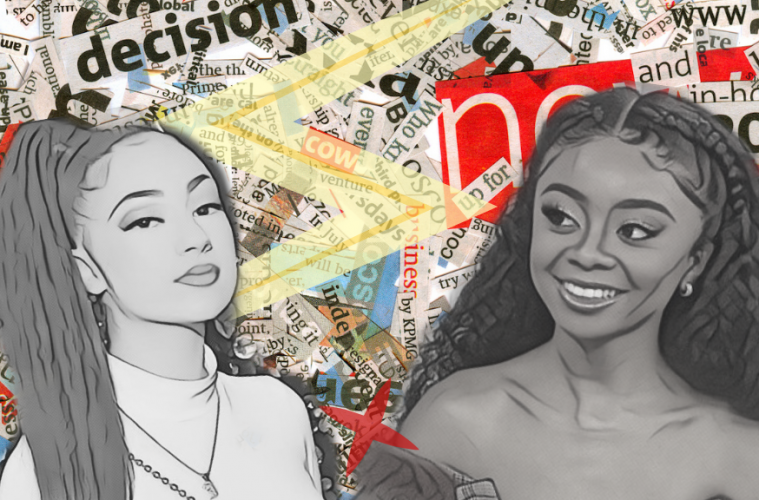 Skai Jackson, from the Disney Channel original shows Jessie and Bunk’d, was caught in an online feud due to videos posted by internet personality and rapper Bhad Bhabie, aka Danielle Peskowitz.

Bhabie, who is frequently accused of appropriating black culture for her benefit, posted on her Instagram live accusing Skai of flirting with her exes and “moving sneaky.” She went on to threaten Skai by yelling in the camera, “I’m gonna f**kin kill you. Don’t post your location…because I’m coming.”

In what could be a response to Bhabie’s rant, Skai simply tweeted a list of her ongoing accomplishments and ended the tweet with, “No time for negatives!”.

However, the person who did have a response was Skai’s mom, Kiya Cole. Bhabie commented on a post of Kiya’s saying, “You should get a hold of that finsta she has.”

Kiya responded by telling Bhabie to give her an address so she could talk to Bhabie’s  mother about the issue. From there the situation escalated as Bhabie’s mom, Barbara Ann Bregoli, stepped in to defend her daughter.

The Shade Room posted the entire conversation to their Instagram.

Black people had a lot to say about the situation, as Bhad Bhabie has not been liked by many who have considered her a “culture vulture” for years. She originally gained fame from yelling the phrase “Cash Me Outside. How bout Dah?” on “Dr. Phil.”

Some people tweeted that we should have never made her famous.

Why y’all made that Bhad babie bitch famous

This bhad Babie and Skai Jackson is the prime example of why y’all need to stop making these culture vultures famous. When yall let other races think that acting hood=being black they disrespect us. Ghetto does not mean black.

Others made jokes about rallying behind Skai to defend her from Bhad Bhabie.

Skai Jackson will be protected at all cost. I’m ready to step https://t.co/tvtR7g4VIM

i’m on skai jackson side no matter WHAT, bhadbabie whats up? pic.twitter.com/c7ts3HdXFr

Some were just confused about why the situation was happening in the first place. Most importantly, people called out the ignorance behind Bhabie’s behavior.

Imagine imitating blackness for the majority of your adolescence just to turn around and say bitches wanna be like you….the delusion. https://t.co/ml9JpFdKNe

Like most internet beef, all of this will be old news by next week. Hopefully what people learn is that allowing Bhad Bhabie to think she is embodying black culture instead of fetishizing stereotypes gives her a sense of false confidence that a white 17-year-old girl should not have.

When the next Danielle Pedkowitz comes around, people will know not to give people like them the attention and validation they are seeking.