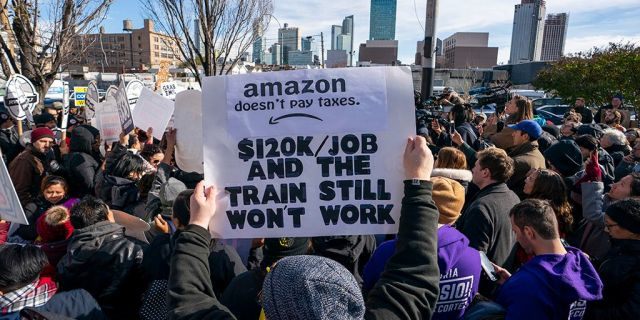 Amazon announced Thursday that it was abandoning plans to build a new headquarters in New York City.

“After much thought and deliberation, we’ve decided not to move forward with our plans to build a headquarters for Amazon in Long Island City, Queens. For Amazon, the commitment to build a new headquarters requires positive, collaborative relationships with state and local elected officials who will be supportive over the long-term,” Amazon spokeswoman Jodi Seth said.

Last November, Amazon chose New York City and Northern Virginia to split duty as its second headquarters. The project was referred to as  HQ2 and the selections came after a year long search. More than 25,000 workers were expected in each city but there has been sustained backlash from the community.

The statement also blamed politicians for not being cooperative with the Jeff Bezos founded company.

“While polls show that 70 percent of New Yorkers support our plans and investment, a number of state and local politicians have made it clear that they oppose our presence and will not work with us to build the type of relationships that are required to go forward with the project we and many others envisioned in Long Island City,” the statement said.

At the time of the initial announcement, New York Governor Andrew Cuomo were among the chief supporters. He and Mayor Bill de Blasio discussed the long term financial windfall for the state which was estimated to be in the billions. However, critics assailed insisted the deal would be bad for taxpayers and neighborhood. New York State Senator Michael Gianaris of Queens, another critic of HQ2, was recommended to serve on the Public Authorities Control Board which controls financing and land use deals that run through public authorities.

U.S. Representative Alexandria Ocasio-Cortez of Queens was also against the endeavor. She recently celebrated on Twitter that Amazon was reconsidering.