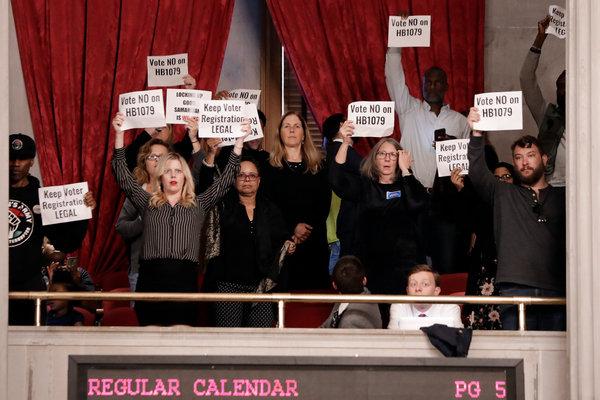 The Tennessean reported that the bill was passed in the Republican-led chamber in Tennesse Monday. HB1079 had the approval of Secretary of State Tre Hargett. Hargett’s office said that thousands of late-filed registration forms created difficulties for local officials. Furthermore, it was alleged that many incomplete documents were filed.

The bill would require groups leading voter registration efforts to undergo training. These groups would potentially face fines for submitting too many incomplete forms. It would also go after a civil penalty against groups that turned in more than 100 deficient voter registration applications.

A group of protesters are outside the @TNHouseReps today in opposition to a bill from @SecTreHargett that would penalize groups that turn in more than 100 incomplete voter registration forms. This is the largest group of protesters at the Tennessee Capitol this year pic.twitter.com/S0E6piLMcG

Critics charged that the bill is a way of suppressing the Black vote in Tennesse.

Charlane Oliver, co-founder and president of Equity Alliance, told Public News Service, that these new guidelines would be making it harder to get more people registered.

“How do you determine intent, when someone is providing you a form, that you don’t know whether the information is true or not?” Oliver said. “You have to go off their word, we cannot verify that, and they’re leaving that burden up to groups to do.”

Sekou Franklin, a political science professor at Middle Tennessee State University, blasted the bill. Franklin said the purpose was just to make it harder for citizens to vote.

“You don’t jail people for trying to politically participate in a democratic way,” he told CNN. “Unless you have other motives.”

At least two protesters of the bill imposing fines on voter registration issues have been removed from the #tnleg gallery by troopers. I’m told the men were “being disruptive” and wouldn’t leave when asked. Unclear whether they’re being charged. pic.twitter.com/NvQxE7a9as

There was protest during the vote which passed along party lines, with a 71-26 vote.

“(This bill) discourages people from volunteering in the Volunteer State,” Tequila Johnson, co-founder of the Equity Alliance, said.

Johnson declared that the bill represented voter suppression and racism. She and other protesters vowed to take action at the ballot box.

“We will get you out,” Johnson said. “We will come for your seats.”

Voter registration groups such as the League of Women Voters to the Equity Alliance and Tennessee Black Voter Project were among the protesters. They helped registered thousands of Black voters last year. There were nearly 100 people to rally against the bill.

The Senate will now take this bill under consideration.