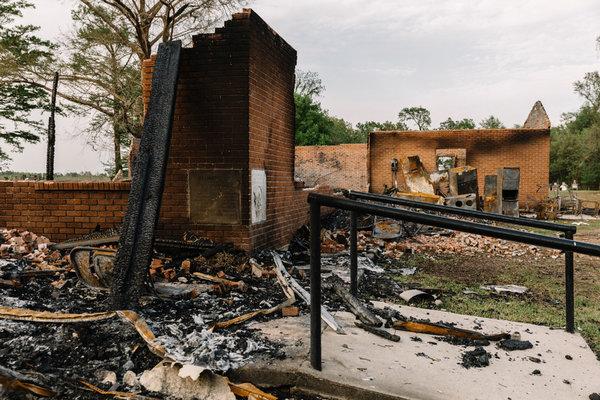 Three historically Black churches that were burned down because of arson have raised $1 million to repair the damage.

The Seventh District Baptist Association lead by President Freddie Jack, created a fundraiser to benefit the churches destroyed by arson. The fires f began on March 26 at St. Mary Baptist Church in Port Barre followed by Greater Union Baptist on April 2 and Mount Pleasant Baptist Church on April 4. They burned within 10 days of each other.

“President Jack requested that a Go Fund Me campaign be initiated to show our support for our church families and the communities affected.  We are unequivocally committed to aiding our Sister Churches,” the post read.

“The donations received are earmarked specifically for the Seventh District’s member churches – St. Mary Baptist Church, Greater Union Baptist Church and Mt. Pleasant Baptist Church.  All of your generous donations will be disbursed equally among all three churches for not only rebuilding their sanctuaries, but for the purchase of all necessities lost in the fires, including pews, sound system, musical instruments, etc.”

Holden Matthews, 21, the son of a sheriff’s deputy, was charged in the arson. On Monday, Matthews was denied bail as officials believed that Matthews would set another fire. State prosecutors filed hate charges as the motivations behind the fires were racially motivated. Federal officials may file additional charges.

Matthews plead not guilty via video conference from the St. Landry Parish jail.

“We felt that he was an immediate risk to public safety,” said Louisiana Fire Marshal Butch Browning. “In my mind, I felt another fire was imminent.”

In court,  Browning said there was much evidence that lined the 21-year-old to the fires including cellphone records placing Matthews at the fire locations, and images on the phone showed all three churches burning before law enforcement arrived.”

The evidence we have was unequivocal,” Browning said. Later he added: “He has clearly demonstrated the characteristics of a pathological fire setter.”

The spike in donations for these Black churches came after it was noted that there was an outpouring of financial support for the Notre Dame burning in Paris. However, similar efforts were lacking for the Black churches. Notable figures such as Yashar Ali, Chelsea Clinton, Valerie Jarrett and Seth Meyers have donated.

The rebuild of Notre Dame will be well funded.

In the past month, three historically black churches in Louisiana were destroyed by a racist arsonist. He has been charged with hate crimes, but these churches need your help. Please join me in donating https://t.co/gj1BcNsGpu