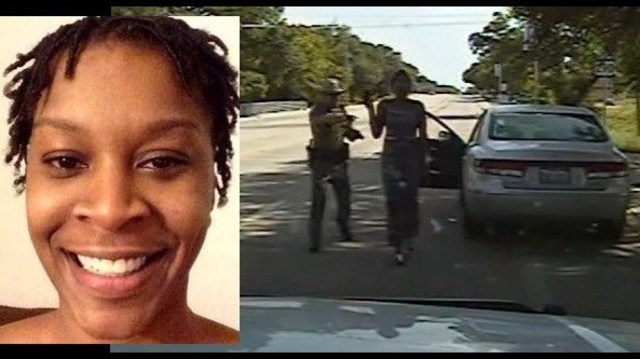 Sandra Bland took cellphone footage of the 2015 traffic stop confrontation with a white Texas police officer, showing her perspective as the trooper drew his stun gun and ordered her out of the car.

The 40 second clip was shared by the Investigative Network, a nonprofit news organization in Texas and aired Monday night on Dallas television station WFAA.

“Get out of the car! I will light you up. Get out!” Trooper Brian Encinia is heard ordering.

Bland exited her car while Encinia still had the gun trained on her. He demanded that she put away her phone.

“I’m not on the phone. I have a right to record. This is my property.”

The video ends after Encinia ordered her to put the phone down.  Previously, only a dashcam video showing Encinia trying to pull Bland out of her car was made public. It led to protests, accusations of police brutality and further fueled the Black Lives Matter and Say Her Name movements.

Bland’s family said they had never been made aware of this footage prior and want the investigation into her death reopened. Bland,a 28-year-old African-American from Chicago, was taken into custody in southeast Texas after the traffic stop. She was found hanging in a jail cell three days later in what was officially ruled a suicide.

Cannon Lambert, a lawyer who represents the Bland family, said the video showed that the 28-year-old did not do anything wrong.

Shante Needham, Bland’s sister, demanded that the case into the circumstances of her arrest and death be reopened.

“Open up the case, period,” Needham told WFFA. “We know they have an extremely, extremely good cover-up system.”

Encinia was fired after being indicted for perjury over the traffic stop. Those charges were dropped after he agreed to never work in law enforcement again. Chip Lewis, Encinia’s attorney, said the newly shown footage did not alter his clients version of accounts. Lewis blamed her “furtive gestures” for posing a risk.

“From a law enforcement standpoint, it had nothing to do with her being agitated as you may have seen on her recording,” Lewis said.