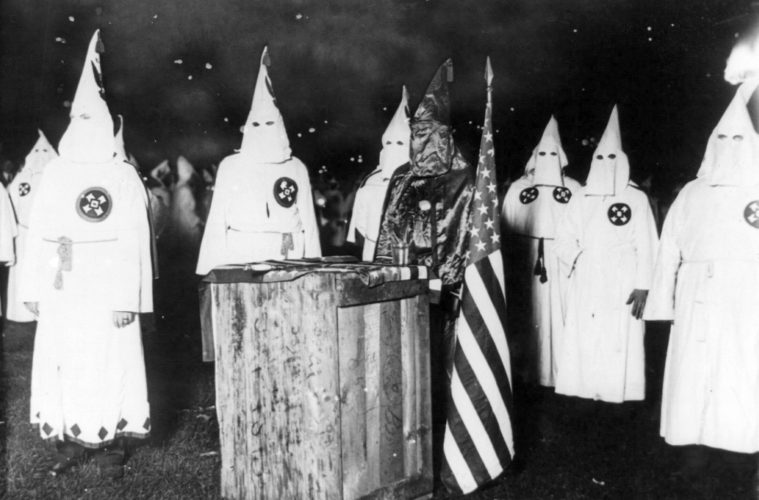 The Evolution of Hate

By 1960, the Civil Rights Movement had gained strong momentum. The nonviolent tactics exercised by Dr.Martin Luther King Jr. guided African American activists throughout the country. On February 1, 1960, four African-American college students took seats at Woolworth’s, a whites-only lunch counter, in Greensboro, North Carolina. The students graciously asked for service but their mannerly demeanor was ignored and they were refused service. The brave young men calmly remained seated as they were asked to leave. It wasn’t too long before an audience of nearly 100 citizens, gathered at Woolworth’s, taunting and ridiculing the teens.

A group of young, angry white men and women dragged the students from the store. Some used racial slurs, while others hurled rotten eggs at the courageous four. A peaceful sit-in was about to play a part in birthing a movement challenging racial inequality throughout the South of the United States. Throughout the nation, thousands of civil rights organizations, students, and everyday community members participated in a six-month-long protest. A new wave of students and youth emerged with demands for quicker changes in the segregated South. Protests, marches, boycotts, and sit-ins soon became more and more common. Change was afoot, however, fury and aggression were never far behind each step forward. It was the same hatred the students were first met with at the Woolworth’s lunch counter. It festered through the movements in the ’60s and continued on, never truly subsiding but instead revisited time and time again throughout history and even today. 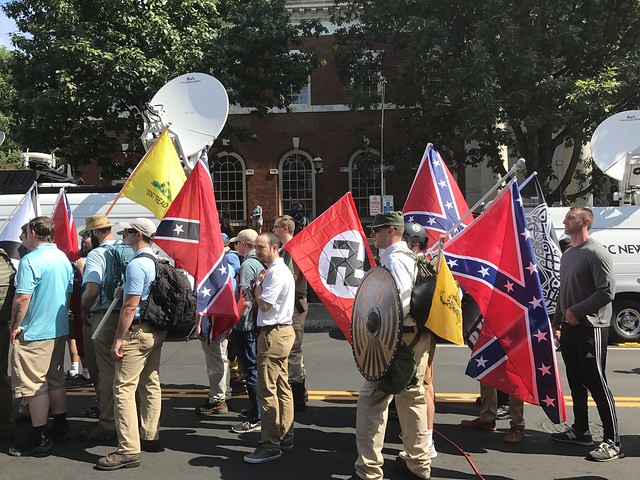 Hate groups are intentionally divisive, spreading a sense of sensational fear throughout the country. Hate groups, both in the past and in modern America, exist to purposely segregate us as a people and nation. According to the Southern Poverty Law Center, “all hate groups have beliefs or practices that attack or damage an entire class of people, typically for their immutable characteristics.” American history is sadly riddled with not only racism and prejudice but also with notorious hate groups. We have taken many progressive strides but our history of institutional racism and white supremacy lingers on as a reminder of the injustice faced by many people of color today. The U.S. Department of Justice cautions that hate crimes, more than any other leading crime, may lead to community clashes and violence, including riots.

The Ku Klux Klan is the most notorious and oldest of all hate groups in the United States. The KKK has perpetually demonstrated a long history of violence and for many Americans, the reference of KKK is synonymous with cross burnings, racial vehemence, and ruthless bloodshed. The Klan’s primary focus has been on African Americans but the group has also targeted Jews, immigrants, members of the LGBTQ community and, in the past, Catholics. Though the KKK’s numbers have dwindled over the years, the group should not be dismissed as irrelevant. Not only is the Klan predicted to remain in the country for years to come but their legacy has continued to play a vital part in influencing the budding and evolving white supremacists and racially motivated groups of today, spreading a message of hate and intolerance everywhere they go. 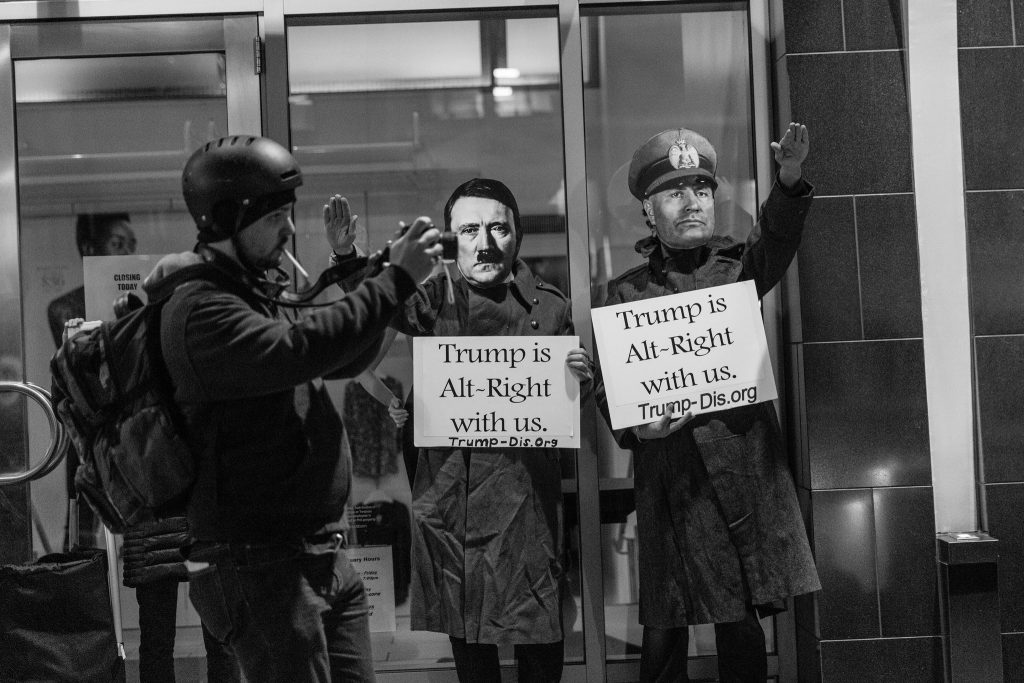 For the fourth year in a row, hate groups and domestic extremism are growing at an alarming rate. In that time, there has been a 30 percent jump in U.S. hate groups and a 7 percent increase in hate groups in 2018 alone. In 2018, there were 1,020 recorded hate groups in the country, a record high in over 20 years. Out of all known white supremacist groups, neo-Nazi groups saw the greatest growth within the movement. White supremacist organizations rose by 22 percent, from 99 chapters to 121. Hate wasn’t limited to one type of organization either. Anti-Muslim groups grew in great numbers for the third year in a row, with a record 114 chapters in 2017 alone, while anti-immigrant groups also jumped, from 14 to 22 in 2017.

Donald Trump’s victory into the White House tapped into a controversial, alt- right, white elitist pulse, spurring those who were more likely to stay tucked away or hidden behind a computer screen, onto our streets for public display. Most notably, the deadly ‘Unite the Right’ event in Charlottesville on August 12, allowed Americans everywhere, to see what was happening beneath the surface of the alternative right. It was so popular that even anti-government militias, which usually shun hate group events, got into the act.

“The numbers tell a striking story — that this president is not simply a polarizing figure but a radicalizing one,” said Heidi Beirich, director of the Southern Poverty Law Center’s Intelligence Project, in an interview with NPR.

The young men donning tiki torches were not alone in their sentiments for the President. A mere four days after the inauguration,  white nationalist leader Richard Spencer said during an interview, “Trump is a white nationalist, so to speak. He is alt-right whether he likes it or not.” Soon after that, on January 31, former Klan leader David Duke tweeted: “everything I’ve been talking about for decades is coming true and the ideas I’ve fought for have won.” Hatred had quickly leaped from keyboards back onto our televised news broadcasts. Bigotry and hate were openly flaunted for the nation to watch in horror and shock.

Racism is on the rise but are we paying attention?

An estimated 40 people were killed in North America in radical right terrorist attacks in 2018, almost double that of 2017. The number of terrorist attacks by far-right groups has also spiked over the past decade, more than quadrupling between 2016 and 2017. Terrorists with alt-right connections murdered an estimated 50 people in 2018. To make matters worse in 2018, every terrorist murder in the US last year was linked to right-wing extremism. This drastic rise in hate means approximately three-quarters of extremist murders in America over the past decade can be linked to right-wing domestic terrorism (more than three times as many as those committed by Islamists). 2018 was the deadliest for right-wing extremist murders in the US since the 1995 Oklahoma City bombing. 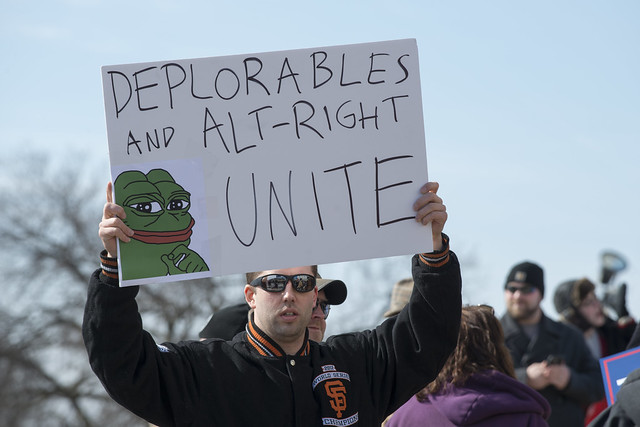 Since the 1950s, black churches across the South have been the targets of numerous racist attacks, from arson to bombings to armed assault. This past March the world watched as one after another, three historically black churches were burned over the course of ten days, in one south Louisiana parish. Although a suspect is in custody, the fear and hatred these acts birth continue to infect the public. It’s time for our nation’s leaders take the time to address the gravity of modern day racism and to offer the needed energy and resources to address the blight of right-wing extremism. Racists and white supremacists are bolstered by the Trump administration. However, they are driven by the fear and xenophobia of the United States’ changing demographics. According to a recent census report, the minority population is projected to rise to 56 percent by 2060, compared with 38 percent in 2014.

By 2013, the modern civil rights movement had gained strong momentum. Groups like Black Lives Matter gained both critical acclaim and criticism. With minority numbers on the rise and combative racial tensions flourishing, so grows the accounts of those willing to figuratively sit at the lunch counters, fighting for equality and the rights of their brethren. In 2018, we watched as thousands took to the streets in protest. Suddenly the racist plight and fight for equality of the ’60s do not seem as though they were decades ago. The issues have evolved and changed but resurfaced in a new manner. We have come full circle. The years have passed, the laws have changed and the politicians have passed on, but tragically, the fear-mongering, racist mentality of a small, but lethal minority lives on.