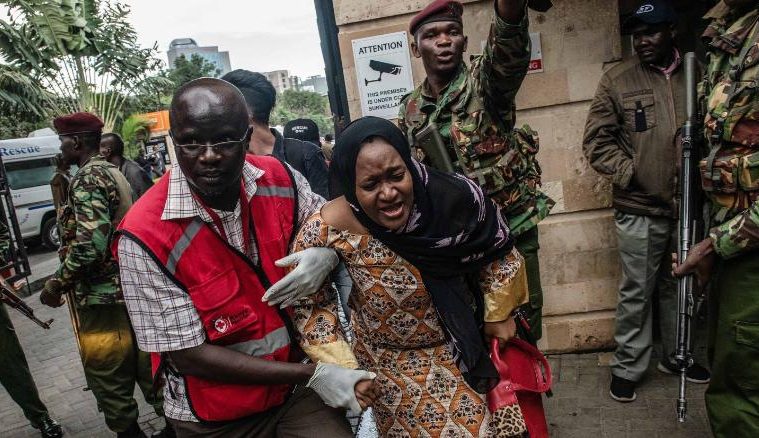 11 people have been arrested after the deadly attack in Nairobi that left killed 21 people including a police offer.

Somalia-based extremist group Al-Shabab claimed responsibility for the gunfire and explosion in attack Nairobi, Kenya Tuesday that lasted more than 18 hours. On Wednesday, the terrorist group said the attack was by the orders of behest of Al Qaeda’s leadership in response to the Trump administration’s decision to move the American Embassy in Israel from Tel Aviv to Jerusalem last year. Their statement blasted “the witless remarks of U.S. president, Donald Trump, and his declaration of Al-Quds as the capital of Israel.” Al Quds is Arabic for Jerusalem.

Shabab militants attacked the upscale DusitD2 and Riverside Drive in Nairobi’s Westlands neighborhood. According to officials, it was a “suspected terror attack” as Kenyan security forces battled to retake control of the luxury hotel and office complex.

Some of the carnage was shown on social media. There were cars engulfed in flames and people seen running for their lives. One reporter tweeted that he was still trapped inside the complex and to tell his family that he loved them.

The Site Intelligence Group which monitors the activities of Al-Shabab said the attack began at 3 p.m. Witnesses told KTN News Kenya of their experience and that four men jumped out of a white car and opened fire as they arrived at a security checkpoint. The gunmen then made their way inside the complex.

Kenyans were upset that The New York Times showed images of dead bodies in their reporting. The paper defended the use of the graphic pictures. Meaghan Looram, director of photography for The Times, said it was important to document the brutality of the attack. Readers disagreed.

“These are not just bodies. These are people whose family and friends are reading your article and experiencing indelible trauma from seeing their loved ones’ photos,” Lorna Kagecha wrote in an email to the publication. “We do not see this kind of nonsense when you write articles on attacks in the Western world.”