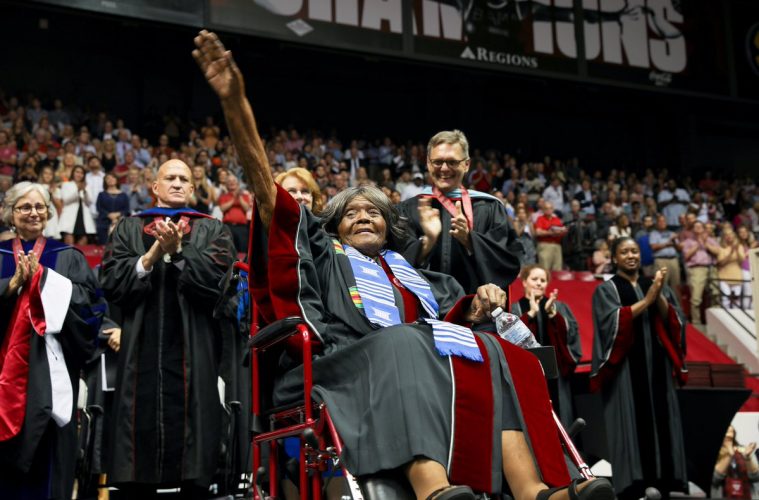 University of Alabama’s first Black student, Autherine Lucy Foster, received an honorary degree 63 years after she was expelled from the school Friday.

In 1956, Foster became the first black student to enroll at the all white university. She had applied in 1952 but was denied admission due to the color of her skin. Three days after Foster began her studies, UA expelled her because of death threats and protests.

Foster returned to the university on May 3 to receive an honorary degree during the graduation ceremonies.

“A legendary moment. Thank you to civil rights pioneer + #UA legend Autherine Lucy Foster for her tenacious spirit in the face of adversity. We are honored to be part of this moment #TodayAtUA #BamaGrad #WhereLegendsAreMade,” the school captioned their tweet to Foster.

A legendary moment.
Thank you to civil rights pioneer + #UA legend Autherine Lucy Foster for her tenacious spirit in the face of adversity. We are honored to be part of this moment #TodayAtUA 🎓 #BamaGrad #WhereLegendsAreMade pic.twitter.com/WhHRxtj47n

“I wasn’t crying, but tears was just rolling down my eyes because it’s just so different and so unique for me to be able to come back to such a university as this,” Foster told WBRC.

Foster remarked how the warm reception was in sharp contrast to the hostility she weathered in her youth. She received a standing ovation and cheers from the crowd.

“The difference is the crowds are here. I see laughing faces instead of people frowning and displeased with me being here,” she continued.

She described the feelings of joy and humility that came over her as she returned to the campus all these years later.

“As we rode across campus today, I said gee whiz this is a blessing in disguise to see the university permitting me to come back here and be involved in whatever they want to do today,” she said.

“I feel elated. Somewhat embarrassed because I don’t feel exactly worthy of what I’m getting. But I’m going to thank them and act as if I can,” she continued.