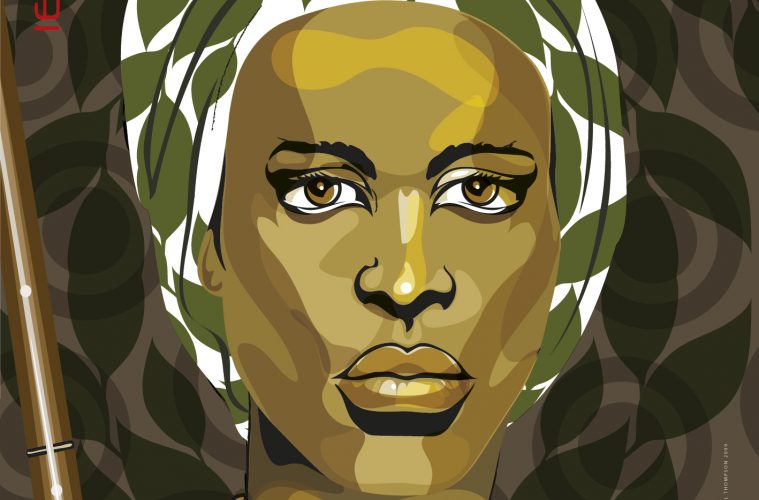 Nanny of the Maroons: The Queen of the Mountain

If you Google images of the Blue Mountains in Jamaica, your eyes are captivated by the deep green of the vegetation that covers the mountain, the calming blue of the sky and depending on the picture you have clicked on, the white clouds and mist that sometimes covers the top of the mountain. It is stunning. The Blue Mountains are the longest mountain range on the Eastern side of the Island, it is home to the world famous Blue Mountain coffee and was also the refuge for escaped enslaved Africans, known as the Maroons in 1655.

The origin of the name Maroon is unclear. It is widely agreed that the word is derived from the Spanish word ‘‘, the meaning though is debatable as it has been said to translate to wild or unruly or ‘Mountaineers’. There are conflicting reports of how the Maroons began living on the Mountains, some say that they were freed by the Spanish in 1655 following the impending invasion of the British while others believe that they ran away from the plantations. On the mountains, the Maroons began creating villages and new life to protect themselves from the British conquest of the island. They split into two groups, with some being situated on the Western side (Leeward) of the Island and the rest remaining on the Eastern side (Windward). In 1720, the Windward Maroons, who were located in Nanny town, received new leadership and guidance from Nanny. Described as a ‘small, wiry woman with piercing eyes,’ she led the Maroons in fighting against the British and attacking their plantations.

Most of the information about Queen Nanny and her exploits with the Maroons comes from word of mouth. It is believed that she was born in the 1600s in modern-day Ghana as a member of the Ashanti tribe, a matrilineal society for their warriors. Some say she arrived in Jamaica as a free woman and probably brought her own slaves because she was royalty, while others say that she was sold into slavery. It has been claimed she was sold alongside her sister Sekesu – who remained enslaved – and her four brothers who are alleged to have been the leaders of the other Maroon communities, Cudjoe, Accompong, Cuffee, and Quaco.

Revered for her expertise in guerilla warfare, Nanny trained the Maroons in combat and led them in their fight against the British from 1728 to 1734. According to the Understanding Slavery Initiative, Queen Nanny taught her fighters how to disguise themselves with branches and leaves to resemble trees and ambush the British. These tactical skills were necessary as the Maroon rebels raided plantations to free slaves, gather food and arms, and then burn the estates.

She is believed to have been an Obeah woman and would use her powers to protect the soldiers she led. According to some accounts, she was also able to catch bullets with her bare hands and she single-handedly defeated a troop of British soldiers with a boiling pot of water. Queen Nanny was not just a spiritual woman and healer, she was also known for her wisdom and would encourage people to continue with the customs and traditions they had come with from Africa.

Some claim that she died in 1734 when Nanny Town was destroyed by British forces who claimed that they killed all the Maroons. However, other accounts claim that Nanny and other survivors managed to escape to a new hideout. According to the profile on her by the Jamaican Information Services, Nanny was still alive in 1739 when two treaties were signed by Quao and Cudjoe which granted land to Nanny and her Maroons where they built the New Nanny Town settlement. Other accounts have it that Nanny signed a Treaty with the British in 1740 and that she died in 1750.

What is undeniable is her courage and legacy. Her memory is immortalized in various ways; her portrait is on the $500 bill, her praises are written in poems and songs such as ‘Queen of the Mountain’ by Burning Spear. In 1982, the Jamaican government declared her a National Hero. She is currently the only woman to have been conferred with that honor.