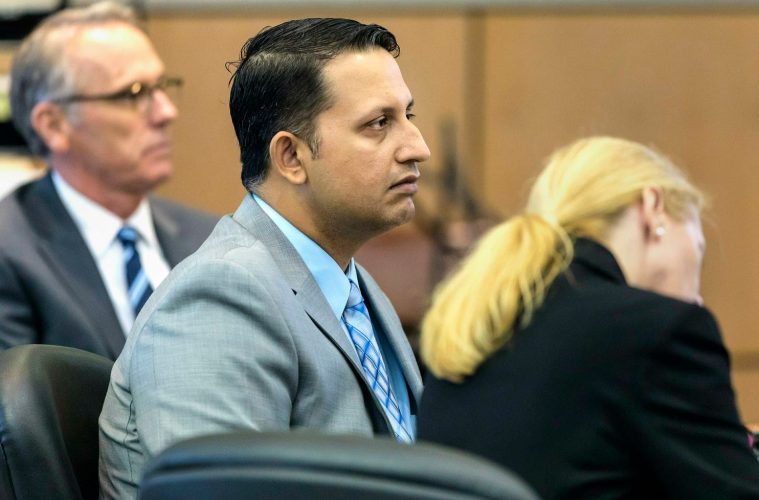 The all white jury made up of four men and two women jury in Florida deliberated for for hours before finding Raja guilty of killing the Black motorist. The fired police officer became the first first officer in the state to be convicted of an on-duty shooting in 30 years. He did not react to the judgment which was celebrated by the relatives of Jones.

“Corey has been here – his soul is not here but he is definitely here in our hearts,” said C.J. Jones, the victim’s brother and a former Cleveland Brown football player. “He walked us through this.”

Raja faces a mandatory minimum of 25 years at sentencing April 26. He could spend his life in prison in Jones’ death. During the trial, prosecutors argued that a normal traffic routine escalated into homicide due to Raja’s actions.

Raja, of Asian descent, was on assignment as part of an auto burglary investigation team.  He was in plain clothes and came upon Jones at 3:15 a.m. Oct. 18, 2015. Jones was returning home from a nightclub performance when his vehicle stalled. He had a concealed-weapons permit and carried a .38-caliber handgun, purchased days earlier to protect his $10,000 drum set, which was in the SUV.

Prosecutors also said that Raja never identified himself as law enforcement and did not show his badge when he approached the SUV. Instead, a recording revealed that Raja yelled at the drummer to raise his hands. Jones replied “Hold on.”. It is believed Jones pulled his gun and tried to get away. Raja fired three shots; Jones ran down an embankment. Prosecutors said he threw his gun, found 125 feet (38 meters) from his body, but Raja fired three more times.

Prosecutors also charged that Raja lied to investigators, unaware that there was a recording of the encounter.

“If that dude would have said he was a police officer right off the bat, this would have never happened,” Jones’ brother said.

Famed attorney Benjamin Crump, who represents Jones’ father and siblings,  said the verdict was a victory for all those who believed in justice.

“When there is a young black man lying dead on the ground, there are different rules that apply — that is our reality in America,” Crump said at a news conference surrounded by Jones’ relatives. “Many people in America don’t want to believe that police officers intentionally kill young black people, but it is our belief they do.” When asked what sentence Raja should receive, Crump and others replied, “What Corey would have got if he shot Raja.”

Raja was fired after the shooting and has been under house arrest since being charged in 2016. He had attempted to invoke Florida’s “Stand Your Ground” law that allows a person to use deadly force in defense.