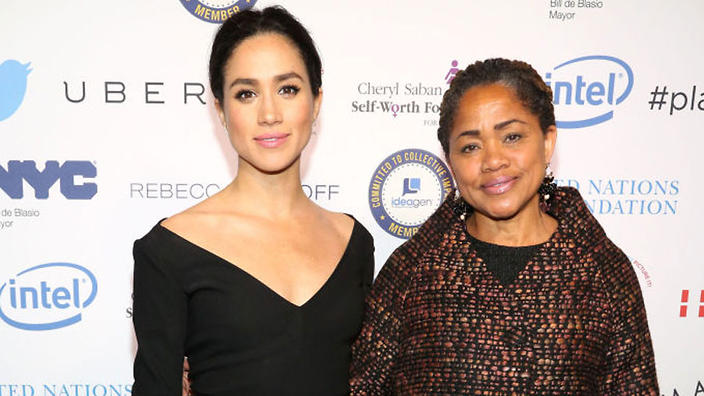 Meghan Markle, Duchess of Sussex, visited Brinsworth House, a nursing home run by the Royal Variety Charity devoted to the care of elderly British artists and entertainers on December 18.Her signature sparkle was on full display as she brought Christmas cheer to the residents; smiling, engaging, making cards and even speaking fluent Spanish at one point.

The @RoyalVariety Charity, of which The Queen is Patron, assists those who have worked professionally in the entertainment industry and are in need of help and assistance as a result of old age, ill-health, or hard times. pic.twitter.com/Ewr8WsTOkp

There was no hint of the family maelstrom her father, Thomas, and stepsister, Samantha, have ensnared her in once again.

Markle was an unbothered Duchess as the glow of pregnancy warmed her features, not a single strand of hair out of place and her head held up high for her last official engagement before Christmas. Some might say that the happy face was a nod to her past as a Hollywood actress and a performance for those watching but another explanation could be the grit and grace passed onto her by her mother, Doria Ragland.

Ragland, who hasn’t been very visible to the public since the May nuptials of Prince Harry and her daughter remains omnipresent nonetheless. She is the living embodiment of Michelle Obama’s “when they go low, we go high.” You have not and will not see her on television making besties with a man who has called Meghan a “social climber” and sullying her reputation or leveraging their bond. That is not her style and from the very beginning of the Sussex courtship, Ragland has stood out for her dignified silence in the face of smears.

Ragland was written about as though she were slumming in the “ghettos” of Compton and all the ugly insinuations that went along with that description; as if she were less than and by extension, so was Meghan for a prince. Her attire of yoga was critiqued as is her choice to wear her hair naturally in locs. In recent weeks, her pregnant daughter has withstood one attack after another against her character which have been aided by Thomas. Still, silence from both ladies and that is not a feat easily accomplished. There is no doubt that both women , made of flesh, are hurt but neither has given into the anger. Instead, they are offering a masterclass in killing one with kindness. They will not be taken out of character even though it would be understand if a different spirit took hold.

Instead, there have been no responses with profanity, clapbacks or screeds about how wronged they have been. Meghan and Ragland have had to be near perfect just to be given the same consideration as Thomas; a man who has found any outlet to join in the harassment of his daughter. He is actively engaging in a public relations campaign, spearheaded by Piers Morgan and other members of the British press, to put Meghan in her place and remove all agency. No means no. A grown adult woman gets to decide who she wants in her life without the fear or reprisal or coercion.

Ragland would be damned for using her connection to Meghan for exposure or expect compensation for being a decent parent. Supporting one’s children is the bare minimum a parent can do but it is not a debt owed in perpetuity, especially if that parent is harmful. Love is an action, not merely a buzzword repeated on the airwaves. We are all known by our deeds and those of Thomas do not reflect someone who has the best interest of his daughter at heart. Just imagine if it were Ragland imposing her will on Meghan, flaunting her relevance on television at every chance. By the second appearance, she would be cited as another declaration of the broken Black family.

Not all of us have healthy and loving relationships with our families and forcing Meghan to act outside of her will  is a terrain that centers Thomas as the injured party; as if she owes it to him to let bygones be or else he’ll keep the pressure up. After all, women are often deemed the problem and the public can be unforgiving. If you say the wrong word, you are deemed crass or vulgar but a man can be edgy. Thomas is an example of how such a man can be indulged and defy boundaries set forth but headlines of protocol being broken abound when Meghan dares to wear a dark nail polish.

Women of any age are subject to be called out of their names for acting out of expected form and especially labeled emotional for expressing feelings of frustration. To do so invites accusations of being unlikable. Then again, well behaved women rarely make history but the good manners shown by the Duchess and her mother are in sharp contrast to the boorish behavior of Thomas and his ilk. In many ways, it is a loud roar and reveals the truth.