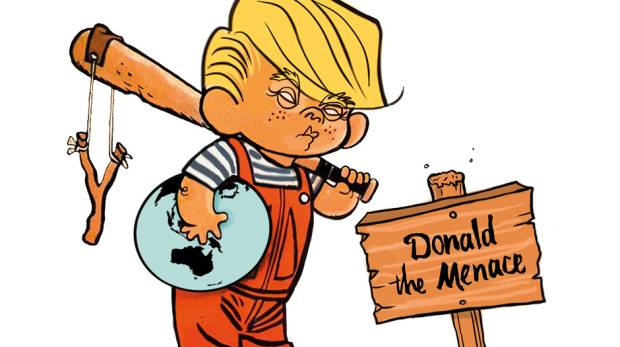 During his first State of the Union Address, Trump Exaggerates to Bolster for Change in Immigrant Policies.

At Trump’s first State of the Union address, the overarching theme was one praising the stories of others: a war hero, the grieving parents of a pair of slain daughters, a North Korean defector and more according to the Associated Press. Riddled with tedious rhetoric, it contained at the heart of his speech, some of his most scathing remarks and opinions toward immigration.

The moving narratives of service and sacrifice offered the opportunity to put some more relatable faces to Trump’s proclamations of the nation’s health, especially as his speech offered few concrete policy solutions to the issues he raised.

“Please,” Trump said repeatedly during his address, raising his arms to the box where the guests were seated with first lady Melania Trump. “Please stand.”

There was 12-year-old Preston Sharp, honored for his work to honor the graves of every military veteran.

And there was Celestino Martinez, a special agent with Immigration and Customs Enforcement’s Homeland Security Investigations, credited with leading a task force that arrested more than 200 alleged MS-13 gang members said the Associated Press.

Going along with said theme, a dark undercurrent was also present, where Trump’s exaggeration of the atrocities committed by the gang Ms-13 was used to bolster his preference for changes to immigration policies. Many immigrant advocates felt Trump’s positioning of “Dreamers” to MS-13 was a rather dangerous and divisive move.

“MS-13 is an example of some of the worst of criminal gang behavior,” Senator Kamala Harris, a California Democrat, said on MSNBC Tuesday night. “To equate that with Dreamers and DACA was completely irresponsible, and it was scapegoating, and it was fearmongering, and it was wrong.”

“It really is a theme of protectionism,” said Mae Ngai, Professor of History at Columbia University on WBAI, “Its to close off the United States to the outside world.”

History professor at the University of Houston, Gerald Horne, sees Trump’s attack on immigration policies as a way to appease his base while neglecting the wars enacted by the former president, Ronald Reagan, in the 1980s, in addition to Southern California’s large immigration population.

“As the Democracy of California changes it will be difficult to maintain policies of overt white supremacy,” said Horne.

Ryan Holets, a police officer from Albuquerque, New Mexico, and his wife, Rebecca, brought their infant daughter, Hope, whom they recently adopted from a victim of the nationwide opioid epidemic.

The White House had announced most of the attendees in advance. But in catering to Trump’s entertainer background — and international sensitivities — it kept two of the most poignant moments as a surprise. The teary-eyed parents of Otto Warmbier, the American student who died days following his return to the U.S. after imprisonment in North Korea, earned a standing ovation from the divided chamber. As did Ji Seong-ho, a North Korean defector who triumphantly pumped in the air the battered wooden crutches he uses to walk after losing a leg before fleeing to the South said the Associated Press.