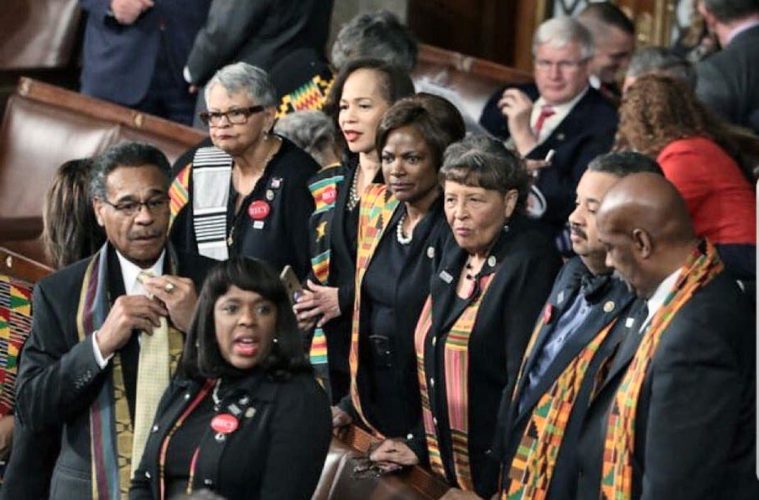 During the dreaded first ever State of The Union address by Donald Trump, the Congressional Black Caucus wore Kente cloth and, according to Essence, Recy Taylor pins, in protest of his recent ‘shithole comments made regarding Africa and Haiti.

While many Democrats and Congressional leaders decided to sit this one out, others attended the address with the sole purpose of delivering a message. Members of the Congressional Black Caucus wore Kente cloth in different fashions to protest Trump’s “shithole” comments about African nations and Haiti, which many Democratic leaders believed to be anti-Black and racist said Essence.

I’m SO here for it! Members of the Congressional Black Caucus (@OfficialCBC) looking like they are attending the Black Panther movie premiere.#SOTU #SOTU2018 #CBC #BlackPanther #YourSeatAintSafe #MidtermElections #YSAS #YSASTee pic.twitter.com/2mEOxgBaS8

Wearing kente cloth to the #SOTU with my fellow @OfficialCBC Members to stand in solidarity with people from you-know-what countries pic.twitter.com/Wc8FIcUKIG

Rep. Marcia Fudge and Congresswoman Robin Kelly of the Congressional Black Caucus appeared on CNN where they were asked by anchor Don Lemon of their views od Trump and his presidency.

“I live in a black neighborhood,” said Fudge,” I’m not afraid to walk down my street. I don’t live in a third world country. I’m as educated as anybody around him because he’s not very well-educated.”