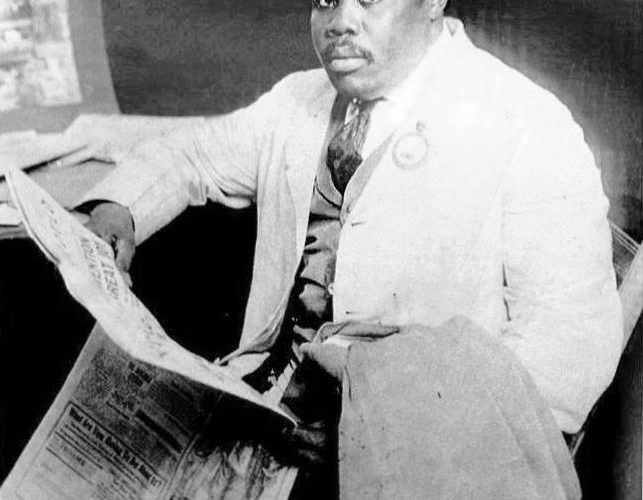 Applied Garveyism: Encouraging the African Family to Depict Yokefellows from the Perspective of a Globally Connected Family

Colonialism and slavery yoked the African family in a negative inhuman manner. The Universal Negro Improvement Association – African Communities League(UNIA-ACL) suggest the postcolonial global African Family turn the table. People of African descent despite the fact of being scattered all over the globe, we can metaphorically yoke ourselves together. That is to say — culturally and economically Yoking Ourselves mutually — attached to the Universal God and each other.

From the book, ‘The Half Has Never Been Told: Slavery and the Making of the American Capitalism,’ by Edward E. Baptist we read —

“Not long after they heard the first clink of iron the boys and girls in the cornfield would have been able to smell the grownups bodies perhaps even before they saw the double line coming around the bend. Hurrying in lockstep, the thirty-odd men came down the dirt road like a giant machine. Each hauled 20 pounds of iron, chains that draped from neck to neck and wrist to wrist, binding them all together. Ragged strips flapped stiffly from their clothes like dead air pendulums. On the men’s heads, hair stood out in growing dreads or lay in dust-caked. As they moved, some looking down like catatonics. (in an immobile or unresponsive stupor.) Other stayed at something a 1000 yards ahead. And now, behind the clanking men, followed a marching crowd of women loosely roped, the same vacancy painted in their expressions, endurance standing out in the rigid strings of muscles that had replaced their caves in the weeks since they left Maryland. Behind them, all swayed a white man on a gray walking horse.”

Slavery ended but the status of the Negro Slave remains. There is a story about a Negro who found himself in court. The defense lawyer as an arrogant white man who felt all Negroes were ignorant and he would have no problem making this witness appear a fool.

The defense lawyer asked the brother, “For the record, tell this court your name.” The Brother answered they call me Farmer Jim.

The lawyer thought to himself, “this nigger don’t even know his name.” Then he asked, “what is your occupation?”

The Negro answered, “I am a farmer.” The question was asked — “How long have you been a farmer”. The answer — “All my life”.

The lawyer thought to himself, “I got this fool.” He said, “surely Farmer Jim you don’t mean that you could not have worked as a farmer all your life.”

The Negro answered, “yes sir, I did farming work ALL MY LIFE”.

The white judge looking surprised looked at the witness and said Farmer Jim you don’t mean that.” The Negro snapped back — Yes sir your Honor it’s true. The smart lawyer then asked, “Tell me, Farmer Jim, what was your farming chores during the age of — let us say from when you were a newborn to say — one year? The Negro thought for a moment and said, “Your honor sir, I was milking and spreading manure.”

Have no doubts the courts classified Farmer Jim as a slave, no matter the yoke was removed, slavery ended now this citizen, this nigger walks around without hauling  20 pounds of iron.

The task of the Universal Negro Improvement Association is to help the global Black people understand how the white man is not the genius we think he is. One has only to think about how the global financial system affects the global Black Race and ask ourselves — what is it that Black people can do to improve our well being. The UNIA – ACL came up with a very simple quality-of-life index based on one question: what percentage of the 1.2 billion members of the Black race subscribe to the idea of cooperating, planning, and acting a Black Racial unit?

The 21st-century UNIA ACL has proposed a Post Colonial Cultural & Economic Conference (PCEC). An index consisting of an alphabetical list of names, subjects. The idea is to produce a model that will culturally and economically improve the condition of the global Black Race — an Africa for African global Cultural and Economic Index as it were. What we have here is the UNIA family at home and abroad intreating the family to come together as we did during the era of slavery when we were yokefellows, now as postcolonial fellow-laborers, seeking to get a handle on the concept of working in harmony. Working collectively for the common good.

African Art is an expression of the Africans creative skill and imagination. Typically in a visual form such as painting or sculpture, producing works to be appreciated primarily for their beauty or emotional power. As such art affords one to think and act as an individual. However economic is the branch of knowledge concerning production, consumption, and the transfer of wealth, requiring teamwork—collective action, people thinking and acting towards the benefit of the many.

The concept of a Global Black Racial PostColonial Cultural & Economic Conference (PCEC) Index can be equated with Square or Box Breathing. Breathing is central to practicing mindfulness that resonates with maintaining a moment-by-moment awareness of our thoughts, feelings, bodily sensations, and surrounding environment. Mindfulness also involves acceptance, meaning that we pay attention to our thoughts and feelings. The point is mindfulness to an Africa for African global Cultural and Economic notion that the PCEC Index, depending on a percentage of Black people to grasp the notion that racial improvement involves pooling resources.

Note — UNIA Kenya has agreed to host the initial PCEC gathering in 2020, their Village, the venue. The Village needs a Community Borehole. They requested the UNIA assist in the funding of the Borehole. What we have here for the first time since slavery and colonialism — a global request for cultural and economic coming together, pooling resources.

This proposal seeks to raise/request for  3.34 million Kenyans shillings, approximately $33,4025, to meet the projected expenses. Here we are talking about the financing of a borehole powered by solar energy in Kakojo village at Nyalkinyi in Homabay County in the Western part of Kenya. If 4,000 individuals donated the equivalent of USD $10, the UNIA KENYA would have well over the amount needed for their borehole.

But for a moment let us look beyond the borehole thinking big, Think in terms of a UNIA ACL PCEC global Credit Union. A credit union is a member-owned financial cooperative, controlled by its members and operated on the principle of people helping people, providing its members with credit at competitive rates as well as other financial services.

Think about our Global Black Racial Post Colonial Cultural & Economic Conference (PCEC) Index where delegates come together discussing a global Cultural and Economic Index Credit Union with 35 percent of the 1.2 billion unit membership participating, donating monthly for the initial movement toward own Credit Union. Imagine what it will take to raise it to 55 percent? This will leads to a discussion of a 21st century Black Star Line and invitations to create Black racial financial wealth on a larger playing field. Said another way the concept of a 1.2 billion-member Credit Union will redefine the term YOKEFELLOWS  from a slave tern to a term depicting the principle of Black People helping other Black People.

Reflect if you will on Bob Marley’s – Redemption Song

Let us not get ahead of ourselves, first things first. The borehole is first and foremost. The boule will say this document is crazy talk. But consider this. The UNIA- ACL Constitution was approved by the global Black community at the 1920 UNIA-ACL international Convention in NYC 1920 — and has never been challenged in a court of law. In Effect, July 1918, amended in August 1920, August 1921, and August 1922. The Constitution in part reads:

Jurisdiction Section 1. This body shall be known as the Universal Negro Improvement Association and African Communities’ League. Its jurisdiction shall include all communities where the people of Negro blood and African descent are to be found. In it alone, and through the Potentate and Supreme Commissioner, hereinafter spoken of and his successors, are vested powers to establish subordinate divisions and other organizations, whose objects shall coalesce and be identical with those herein set forth, and its mandates shall be obeyed at all times and under all circumstances.

The Universal Negro Improvement Association’s Constitution gives the UNIA the legal mandate to establish a Credit Union for its 1.2 billion members. Indeed the purpose of the UNIA-ACL PCEC Index or an Africa for African global Cultural and Economic Index is to inspire continuous conversation and action in every Black Racial neighborhood and village on earth about what it means to feel safe and secure where you live and work. For your children to be physically free to wander and roam without concern of slavery and colonialism, or Euro-American so-called Capitalism.

The Global Black Racial PCEC Index — an Africa for African global Cultural and Economic Index will lead to a discussion about the UNIA-ACL’s ability to motivate Black People at home and abroad. To create sustainable businesses and jobs and place a capital “I” on the word Improvement, as in global Negro Improvement.

It should be noted that the League of Nations, the United Nations, the World Court, (The 15-member ICJ, or World Court, is the principal judicial organ of the United Nations, seated at The Hague in the Netherlands. It is charged with settling legal disputes submitted to it by states and giving advisory opinions on legal questions from U.N. bodies and agencies.) (We Charge Genocide: The Crime of Government Against the Negro People is a paper accusing the United States government of genocide based on the UN Genocide Convention.) Yet no Black Government to date has brought the issue of slave reparation before the World Court. Why? When they could have come together as a unit but no it never happened.

Again the Black Intellectuals, the boule, suggest such talk is Crazy Talk but the 1.2 billion members of the global Black Race and The UNIA ACL Constitution don’t think so. The UNIA’s PCEC is designed to bring the matter up for discussion. Note the boule from the time of W.E.B. Du Bois worked with the white power structure (including the New World Order, the United Nations, the Catholic Church), serving as gate-keepers. W.E.B. Du Bois and others work to erase the word IMPROVEMENT from the Black Racial mindset.

We will close with this — Taken from the book the ‘Half Has Never Been Told — Slavery and the Making of American Capitalism,’ by Edward E. Baptist. (page 44-45). We read —

“Total African victory was a little thing entirely— it was so incomprehensible, in fact, that European thinkers, who couldn’t stop thinking about the revolution in France, clammed up about Saint-Domingue. The German philosopher Georg Hegel, for instance, who was in the process of constructing an entire system of thought around the idealized, classical image of a slave rebellion against a master, never spoke of the slave rebellion going on in the real world. Even as reports of fire and blood splattered every weekly newspaper he read, he insisted that African people were irrelevant to the future that would be shaped by the newly free citizens of European nation-states. Yet the revolution in Saint-Domingue was making a modern world. Today, Saint-Domingue is called Haiti it is the poorest nation in the Western Hemisphere. But Haiti’s revolutionary birth was the revolutionary revolution in an age of them. By the time it was over, these people once seemed crushed between the rollers of the European empire, ruled the country in which they had been enslaved.”