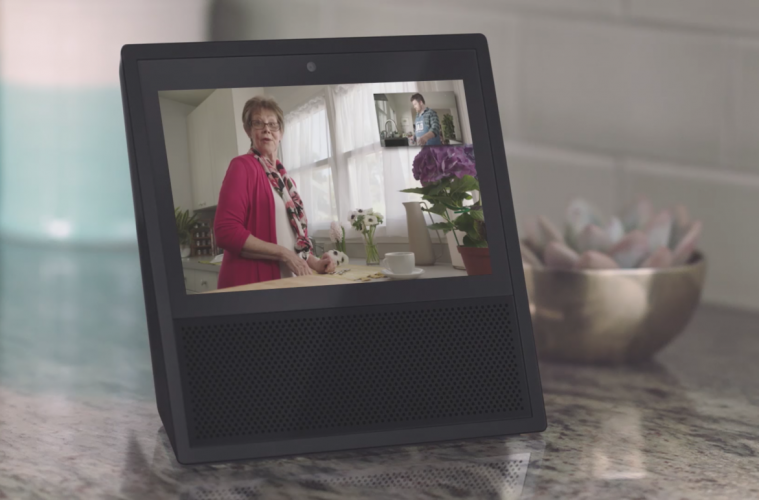 When is the last time you used your landline phone? Chances are that your smartphone is the one and only device you need. Old-fashioned phones have been fading away from most living rooms. But it doesn’t mean that landline phones aren’t useful. Amazon is well aware of that. The company unveiled the Echo Show earlier this week, a $230 device with Amazon’s Alexa voice assistant, two powerful speakers as well as a camera and a touchscreen.

But don’t get fooled by the display. It works more or less like the original Amazon Echo. If you want to play a song, you can tell the device “Alexa, play some Beach House” to start streaming Beach House songs using your favorite music streaming platform. You don’t open the Spotify app on the screen. The Echo Show isn’t an Echo with a built-in Android tablet. It’s an Echo with an information display. Sure, you can tap on it to pause the music. But your voice remains the main user interface.

There’s one thing you can do with a display that you couldn’t do before — video calls. Amazon didn’t invent Skype calls. Arguably, I’d even say that Apple made video calls popular again thanks to FaceTime. But would you say you use your phone to call your family and friends more often or less often than 10 years ago? Today, it’s all about texting, Snapping, WhatsApping and more. I’ve noticed this myself. I talk less but I share short snippets of text constantly. This trend is so strong that it doesn’t feel natural to cold call someone anymore. I rarely pick up the phone except if it’s my mum.

That’s why Amazon isn’t reinventing the wheel. The company is just making phone calls less intimidating. Other companies like Nucleus and Insensi have worked on this, and Amazon was probably strongly inspired by them. You can shout “Alexa, call grandma” and your grandmother will appear on the screen of the device. You know that if your grandmother isn’t at home she won’t even get notified, so it won’t feel like you’re interrupting something.

More importantly, everyone will be able to use the device, young kids and elderly people included. It’s much easier to buy an Echo Show and give it to the grandparents than explaining to them how to use a smartphone if they aren’t using one already. The Echo Show will be at the center of the living room or kitchen. It’s going to bring the family together and people are going to love this thing. Finally, there’s a built-in viral loop. Amazon wanted you to buy an Echo for every home. With the Echo Dot, the message changed slightly — the company thinks you need an Echo device for every room. Now, with the Echo Show, Amazon is saying that you need to buy an Echo device for all your family members. The company even suggests that you should buy two devices at once (and save $100). Amazon is an infrastructure and logistics company. Before you realize it, Amazon is going to have a device in everyone’s living room.