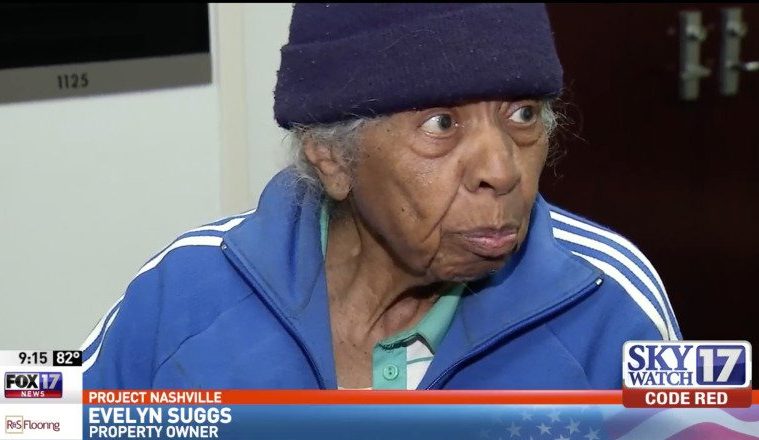 94-year-old Evelyn Suggs is the owner of several properties in Nashville, Tennessee that developers want but she refuses to sell, not selling nothing is what she said.

Suggs told WZTV Wednesday that dirty tactics have been used to get her to relent. That was not about to happen.

“I’m not selling nothing!” Suggs said.

“You know what? People don’t really give a damn about other people now. You know all they want to know what can you do for them?”

“I’m not selling nothing!” 94-year-old Nashville landlord REFUSES to sell to 'aggressive' developers using 'dirty tactics' to get prime real estate in the 'IT' city…and now she's in court.

According to the Nashville Business Journal, there are at least 187 projects planned in the area where Suggs owns her property. Suggs said she’d been taken to court for codes violation after she turned down offers to buy her properties.

“They wanted the whole damn street, but they couldn’t get it because I was there. You understand and I’m not selling,” she said.

Dr. Yvette Tisdale, assistant pastor at Lee Chapel AME, argued that the developers wanted to wear her down.

“I think it is a way of fining her so she’ll get tired and move on,” Tisdale said.

Tisdale described the harassment Suggs has endured all because she would not sell her properties on Jefferson street.

She owns five on Jefferson Street and several other properties all around Nashville. They’re using dirty tactics by reporting her to codes for grass, for a car, for a mailbox, anything they can think of,” she said.

Attorney Grover Collins added that developers are strong arming people to get their way.

“It definitely highlights the situation and puts a bright shining bulb on the types of things and tactics that are going on in the city,” Collins said.

Trey Campbell, owner of Knock Out Wings, has benefited from being one of Suggs’ tenants. He supported her fully.

“Leave her alone. Ms. Suggs is a sweetheart. We’re not going to let them take it from her. She’s like a grandmother to me,” he said.