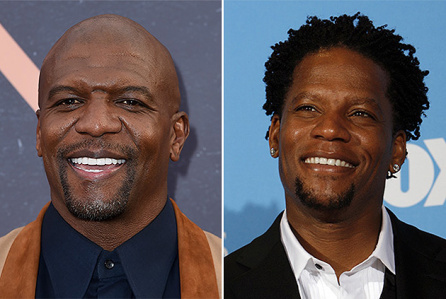 Terry Crews called out celebrities who have mocked his sexual abuse and offered to slap comic D.L. Hughley who questioned his manhood.

The Brooklyn Nine-Nine star was groped him at a Hollywood party in February 2016 by Adam Venit, the longtime talent agent and an architect of Endeavor and WME’s movie businesses. Crews appeared on Good Morning America in November 2017 to describe the incident.

“I’m looking like, ‘Is this a joke?’ I mean I don’t understand, it was actually so bizarre,” Crews said. “He comes over to me. I stick my hand out and he literally takes his hand and puts it and squeezes my genitals. And I jump back like, ‘Hey! Hey!’”

Crews said that his wife, Rebecca King-Crews, helped him to remain calm in that manner. She was afraid that if he had reacted as a “large, African American male”, he would’ve been regarded as a thug and thrown in jail.

Prosecutors decided not to file charges against Venit and he resigned from WME in September 2018 after his suit with Crews was settled.

Crews has been one of the few males faces in Hollywood to speak out against their abuse in the #MeToo era as much of the conversation have been centered on violations against women. He has continued to share his story and the retaliation he faced. He has shared understanding in why women were afraid to come forward, suffered from PTSD and the abuse of power. He has maintained he will not be shamed as he has been inundated with disbelief and mocking, in particular Black men, who called into question his account. 50 Cent, Rusell Simmons, Tariq Nasheed and Hughley are just a few who felt Crews should have responded to his assault with more aggression and suggestions he wanted to be touched inappropriately.

Hughley said that Crews was given “muscles” for a reason. On Sunday, Crews responded to the taunting via social media. He asked the comic if he “Should I slap the shit out of you?”

Crews has been pushing back against “toxic masculinity” and rejecting that violence is the only resort. He found support in many users, including Bernice King. The daughter of Martin Luther King Jr. offered praise for his courage and outspokenness.