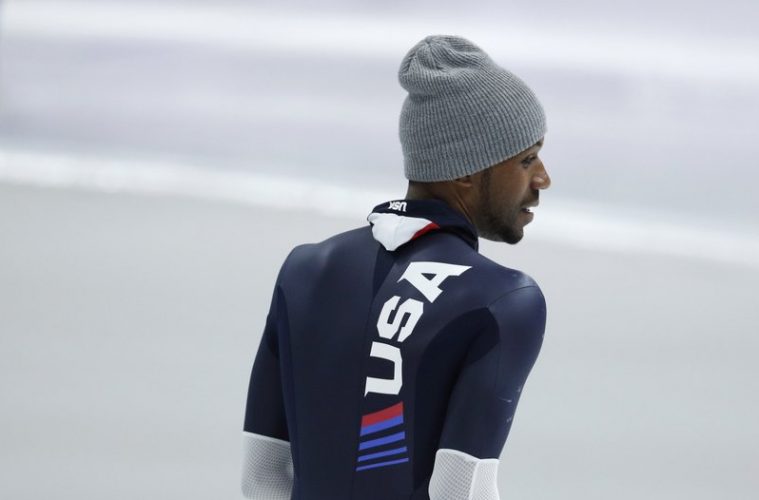 Speedskater Shani Davis was noticeably absent from the opening ceremony of the Pyeongchang Olympics after losing a coin flip to carry the U.S. flag and lead American athletes into the stadium.

A U.S. Speedskating spokesman said Saturday that Davis originally planned to skip Friday night’s festivities because of his training schedule but briefly reconsidered when he was nominated by his teammates to be the flag bearer.

Davis and luger Erin Hamlin tied 4-4 in voting by fellow athletes to carry the flag. Hamlin won the honor in a coin toss, a process the 35-year-old speedskater said was executed “dishonorably” in a post on his Twitter account.

His tweet included a hashtag mentioning Black History Month, which raised the question of whether the five-time Olympian was suggesting that race played a role in the decision. Davis is black, Hamlin is white.

The tweet drew a firestorm of reaction on social media, with Davis alternately criticized by some and supported by others.

He didn’t speak to reporters after his training session Saturday for the second straight day.

A tweet from his account a few hours after the opening ceremony read: “It has been such an honor to have represented the greatest, most diverse country in the world at the last five Winter Games during the same month as #blackhistorymonth #goTeamUSA Watch ‘Origins of Black History Month.’”

Team spokesman Matt Whewell said Davis was intent on staying focused on his Olympic races for now. The two-time Olympic champion is set to compete in the 1,500 meters on Tuesday, followed by the 1,000 on Feb. 23 according to the Associated Press.

Davis has trained separately from his U.S. teammates for years, including the last two summers in South Korea.

In a Feb. 6 blog post he wrote for TeamUSA.org, Davis explained that he chose to complete his pre-Olympic preparations in Germany while the U.S. team had its camp in Milwaukee. He wrote that he was “so charged up and nervous” in boarding his flight from Amsterdam to Seoul that he didn’t pay attention to his seating assignment.

Another passenger tried to claim a seat that Davis believed was his, although the skater admitted he was incorrect said the Associated Press

“I felt he was being rude by the way he blurted to me I was wrong, and I responded to him something like, “Don’t be mean about it!!” Davis wrote. “People make mistakes, so of course he was laughing and I told him not to smile at me!! I couldn’t believe this situation I was in lol, but maybe this is that fire my skating has been missing?! If so the skate world better watch out!!”

Davis was part of an Olympic controversy in 2006 when he became the first black athlete to win an individual gold medal at a Winter Games. He decided not to take part in the team pursuit event, which raised the ire of teammate Chad Hedrick. Their animosity toward one another was obvious at a news conference when Hedrick brought up the team pursuit and Davis stormed out of the room said the Associated Press.

“Whether you are the flag bearer or not you will go down as one of the best Winter Olympians in US history,” he wrote.