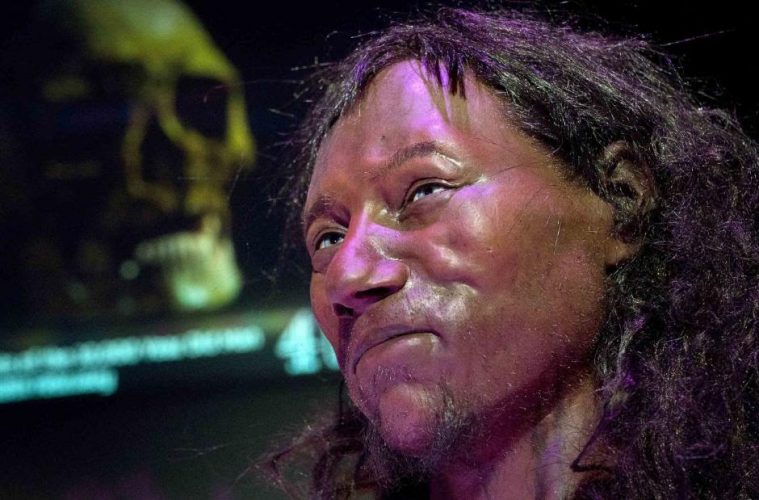 New research suggests one of the oldest humans inhabiting England was a Black man.

Scientists were able to create a portrait of the oldest Briton based on new research from the ancient DNA taken from a skeleton. The DNA is from a human who lived 10,000 years ago in England called the Cheddar Man.

Some researchers were already under the impression the first Britons were Black people with blue eyes, according to the National History Museum (NHM). The discovery of Cheddar Man’s skeleton was in 1903.

Cheddar Man’s extracted DNA reveals that previous assumptions of the British Isles having lighter skin and hair were wrong.

The modern traits of the average White Briton didn’t exist in the past 5,000 years, according to Science Magazine.

The Cheddar Man was a dark-skinned, blue-eyed Mesolithic hunter-gatherer who lived in Gough’s Cave in Cheddar Gorge, Somerset, England.

This Stone Age caveman was 5ft and died in his 20s, according to the NHM.

Ever since, Gough’s Cave has been a popular tourist attraction.

When Cheddar Man was discovered, his skeleton had a narrow pelvis shape. There’s a hole in his skull probably from an infection or from damage from early twentieth-century mining.

Cheddar Man’s head was visualized by a team of White scientists. The project was led by Kennis & Kennis Reconstructions who specialized in palaeontological reconstructions.

Professor Chris Stringer, one of the many museum scientists, has been studying Cheddar Man for more than 40 years. The scientists collaborated with reconstruction company to represent the most accurate look.

Kennis & Kennis Reconstructions took measurements of the skeleton, scanned the skull and 3D printed a base for their model.

“Of course facial reconstruction is part art and part science,” Tom Barnes said via the NHM. “But there are some standards of how thick the tissue is in different regions of people’s faces so they can use those conventions to develop the morphology of the face.”