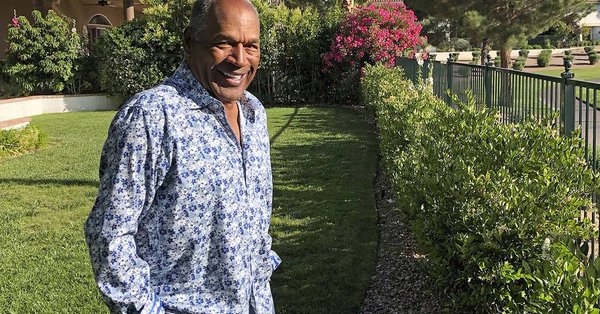 OJ Simpson is living his best life following a stint in prison and 25 years after the murders of his ex-wife Nicole Brown-Simpson and her friend Ron Goldman.

The 71-year-old exclusively spoke to the outlet recently and their interview was published Monday. He shared that he was happy, healthy and played golf everyday living in Las Vegas but would not comment on the 25th anniversary of the murders of his ex-wife and her friend.

On June 12, 1994, Brown Simpson, 35, and Goldman, 25, were stabbed to death in her Brentwood home in Los Angeles. OJ Simpson, who had a history of domestic abuse against his ex with whom he shared two children, was the primary suspect. He was arrested and was prosecuted in the “The Trial of the Century” for the brutal deaths that polarized the country among racial lines. The fabled “Dream Team” led by Johnnie Cochran helped acquit him in 1995.

Simpson has always maintained his innocence and vowed to find the real killer. However, he was found civilly responsible after a wrongful death suit was filed by the victims families. He was ordered to pay $33.5 million.

“We don’t need to go back and relive the worst day of our lives,” he said on the eve of the anniversary. “The subject of the moment is the subject I will never revisit again. My family and I have moved on to what we call the ‘no negative zone.’ We focus on the positives.”

In 2017, Simpson was once again arrested. The former NFL’s Buffalo Bills running back, known as the Juice, served nine years in jail for robbery and kidnapping over an attempt to steal back some of his sports memorabilia from a Las Vegas hotel room. He was paroled in October 2017 and has settled in Las Vegas.

“The town has been good to me,” Simpson said. “Everybody I meet seems to be apologizing for what happened to me here.”

Kim Goldman, Ron’s sister, expressed disappointment that Simpson has continued on with his life. “Confronting: O.J. Simpson” is a podcast she will soon be launching that seeks to prove his guilt.