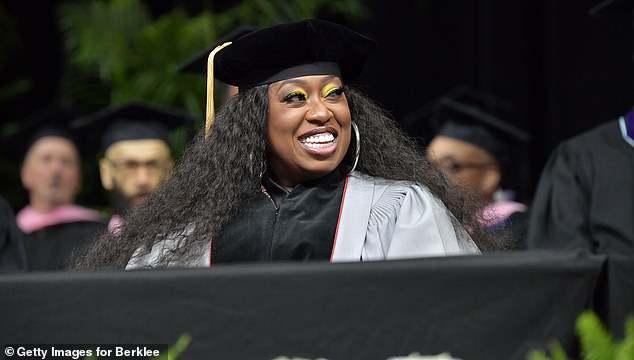 Missy Elliott received an honorary doctorate degree from the Berklee College of Music on Saturday.

Other honorees included pop superstar Justin Timberlake and composer and musical director Alex Lacamoire. The three were recognized for their achievements and influences in music, and for their enduring global impact. Elliott was emotional as she accepted her doctorate before the graduating class and offered encouragement.

“I don’t even know how I’m standing here, but I thank y’all, I thank God,” she said. “I just want y’all to know, there will be ups and downs. Prepare for that, but don’t give up. I know you may hear that all the time, but if I had given up long ago, I wouldn’t be standing here today. You have come too far to quit.”

Elliott spoke about how she went up against the beauty norms in the music industry and not fitting into the classic norms. She also referenced her battle with Graves disease that she was diagnosed with in 2011.

“I became ill where I couldn’t even write,” she said. “My nervous system shut down on me. I thought, ‘This was it’ — is no need for me to keep going. But something in my spirit, the drive, and the patience, as long as you are breathing, it is never too late. People will tell you you’re too old. People will tell you it would never work. Don’t believe that, because I’m standing here today.”

Elliott closed her remarks by stating that she would take her cap and gown with her everywhere. The “Get Ur Freak On” hitmaker joked she’d take the attire with her “in the shower, in all my next videos, everywhere I go!”

Elliott’s celebrations continued online as she told fans to do for themselves.

“CREATE YOUR OWN LANE!!!!!!!!!!!!!!! Sincerely Dr. MISSY ELLIOTT @BerkleeCollege Thank you for this Honorary Doctorate Degree I am SO HUMBLED,” she captioned the post.

CREATE YOUR OWN LANE!!!!!!!!!!!!!!! Sincerely Dr. MISSY ELLIOTT🙌🏾🙌🏾👩🏾‍🎓 @BerkleeCollege Thank you for this Honorary Doctorate Degree I am SO HUMBLED🤗 pic.twitter.com/JipNdcrRYb

Watch her speech to the 2019 graduating class below.