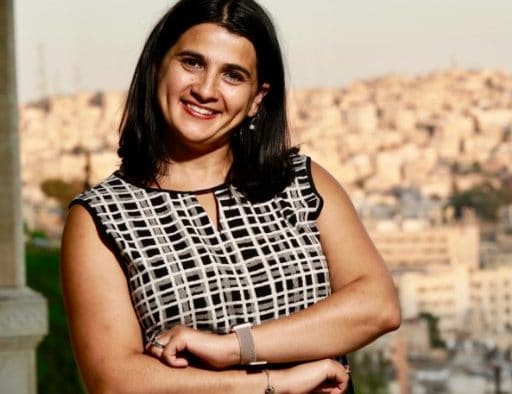 D.C. Author Natasha Tynes shamed a Black metro employee for eating on the train and subsequently lost her book deal amid the backlash.

The Washington Post reported that Tynes, a Jordanian-American writer and World Bank employee in Washington, tweeted a picture of the Black woman eating on the Red Line Friday. She criticized the employee who was dressed in her Washington Metropolitan Area Transit Authority uniform and eating. Tynes tagged the WMATA account, reporting that when she confronted the woman for breaking Metro rules, the woman replied, “worry about yourself.” 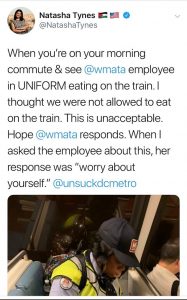 Metro rules ban eating, drinking, smoking and littering on buses or trains and in stations. However, many are often in violation.

“When you’re on your morning commute & see @wmata employee in UNIFORM eating on the train,” Tynes tweeted. “I thought we were not allowed to eat on the train. This is unacceptable. Hope @wmata responds.”

The backlash against Tynes was immediate with users noting that the self described “minority writer” was shaming a black woman and accused her of racism. The author also did not know if the employee was merely eating before her shift started. It was also noted that Tynes not only possibly doxxed the woman but sought to have her disciplined or fired from her job for eating.

Tynes backtracked, offering a curt apology for her actions, Saturday. However, that was not sufficient as her book deals fell through. Rare Birds Books, the publishing house set to distribute Tynes’s upcoming novel, “They Called Me Wyatt”, pulled out.

A word from us on what happened this morning with Natasha Tynes in DC. pic.twitter.com/gJY4lZLFUQ

“Black women face a constant barrage of this kind of inappropriate behavior directed toward them and a constant policing of their bodies,” the outlet said in their statement.

“We think this is unacceptable and have no desire to be involved with anyone who thinks it’s acceptable to jeopardize a person’s safety and employment in this way.”

“We do not condone her actions and hope Natasha learns from this experience that black women feel the effects of systematic racism the most and that we have to be allies, not oppressors,” California Coldblood said in a statement.

Regarding Natasha Tynes' actions this morning in Washington DC: pic.twitter.com/LvBq8YoONH

Users began to leave poor reviews on Tynes’ page on Goodreads  and flood her with negative comments on the unreleased book. Tynes has since deleted her social media and her website is unavailable.

Barry Hobson, the chief of staff for the Metro workers union — Amalgamated Transit Union Local 689, released a statement and said that the unidentified worker was taking her meal break while in transit from one assignment to another. An investigation was underway but that the union would not support any disciplinary action against her.