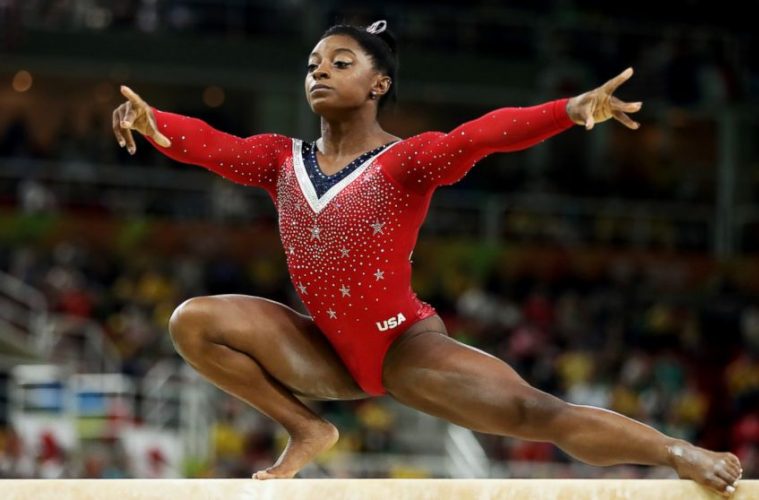 Based on her book, “Courage to Soar: A Body in Motion, A Life in Balance,” “The Simone Biles Story: Courage to Soar” tells the story of Biles many sacrifices and the hard work that led her to win 19 Olympic and World Championship medals, cementing her as one of the greatest gymnasts of all time according to Lifetimes official website.

The movie opens with an intense scene of a young Simone and her three other siblings standing at the doorway of their home as the eldest Ashley, cradling their baby sister Adria, insists to their Social Worker that she is fit to care for her siblings.

Due to the drug addiction and alcoholism their mother endured, Simone and her younger sister, Adria, are ultimately adopted by their grandfather Ronald Biles and his wife Nellie Biles (played by Julius Tennon and Tisha Campbell-Martin) while Ronald’s sister took the two older siblings.

Simone’s issues with her mother are pretty glossed over, possibly for time constraint, then it jumps right into Simone’s initial interest in gymnastics. When she enters the gym, her abilities as a natural talent are revealed. The young actress, Nakai Takawira, charms the audience with her cuteness and effortless talent.

The plot almost instantly propels into her high-stake competitions that gain her elite status. The actress Jeanté Godlock effectively captures the essence of the Simone Biles we know today who won over America’s heart with her bubbly personality and spunk she reflected in her routines. It is clear that Godlock also has some training of her own as she executes a lot of the stunts gracefully.

There were frames of actual footage of Simone’s routines and home videos seamlessly weaved in throughout the film that helped to give off a more realistic aesthetic.

In the midst of her many triumphs, the film lightly touches on some of the personal and social issues that are not uncommon for talented black youth, especially in her position. From a fellow gymnast’s sneering, racial comments to undermine her accomplishments, and to be diagnosed with ADHD, Simone dealt with many trials and tribulations to reach the level of high-esteem she has achieved today.

The obstacle consisting of most of the runtime was Simone’s once failed pursuit to get on the junior national team. Eventually, she is victorious and becomes three-time world champion, but then after committing to UCLA, she is faced with a tough decision of choosing between scholarships or sponsorships to which she wants the latter and focuses on the Olympics.

There is a lot more to be said of Simone Biles’ story that could not possibly be told in the time block afforded on the Lifetime network but overall the story was presented well.