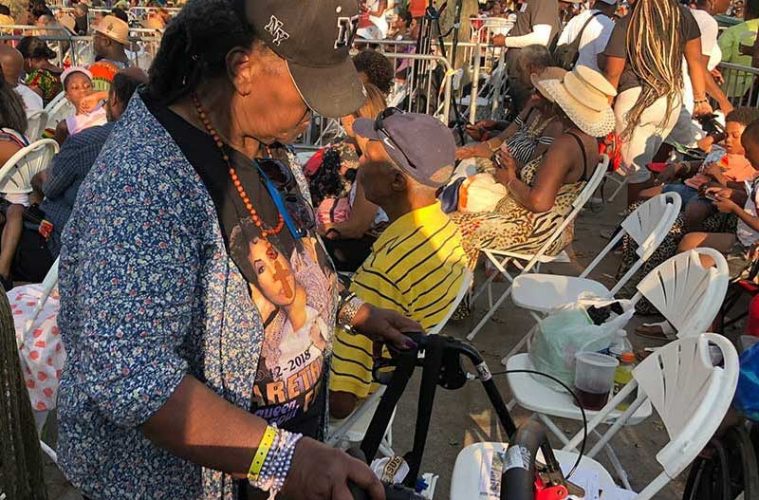 Harlem Week: Jay-Z’s Newest Artist Flopped Because The Audience Was Too Old

Jay-Z’s newest signed artist was struggling to excite New Yorkers at a free concert in Harlem.

Nicole Bus is an upcoming Roc Nation artist, and she has a number 1 song called “You” on Billboard’s Adult R&B Songs chart. However, this Holland singer wasn’t popular among concert-goers at Harlem Week.

The singer sang three songs at max volume, bass pumping levels, but the audience, which from the looks of things, were more than 40 years old, didn’t care.

No one, but one single awkwardly dancing man, was into her songs.

One of Jay-Z newest artist @Thenicolebus had only one person dancing to her songs on the first day of Harlem Week. pic.twitter.com/jyJ1DwT2Zl

The off-beat-dancer had on a pair of dirty Jordans, unkempt dreadlocks, and a scruffy beard.

At one point, Bus had technical difficult where her microphone was cut off.

Who Is Nicole Bus

Bus is a 29-year-old Dutch R&B singer. She is one of the contestants of NBC’s hit Dutch reality TV series, The Voice of Holland.

In season 13, the R&B singer was one of the top four finalists on the TV show. Although she lost, she would eventually catch the eye of Jay-Z in 2018.

She is a writer, vocalist, multi-instrumentalist, and performer.

Growing up in a small Holland village, Bus was listening to artists like Sade, Bob Marley, and various gospel artists like Ron Kenoly.

The problem isn’t with Bus. The audience members at Harlem Week were too old to understand what was going on.

In the front row of the free concert, dozens of mostly Black female senior citizens who were occupying multiple empty seats.

Perhaps some of them attended the show to see the regional gospel caravan segment, featuring Kirk Franklin.

The audience was ecstatic to see Franklin perform his hit singles on that Sunday evening. Some of them chanted encore and insisted he played more requested songs.

Perhaps some of the audience members came to the show to see Spike Lee be honored by New York City.

With the celebration of his first breakthrough movie 30 years ago, Do The Right Thing, and it parallels with Eric Garner’s situation, Lee is seen as an activist of the people.

Perhaps Harlem Week promoters didn’t do enough to promote the event to a younger and diverse audience.

The event’s fashion fusion segment which had a bikini swimwear runway, including one male model wearing a speedo, had a bigger impression than Bus’ music.

Other Young Artists Flopped Too

Before Bus’ performance, a young African Bop band performed, and the crowd barely move an inch.

The band sung a song called “Black Privilege” and the reception seemed mixed. Most of the audience gave a blank expression, some threw their hands in the air, and some waved their fans but that’s because it was an extremely hot Sunday in Harlem.

The Band once asked the crowd if there were any Queens in the audience, and no one responded back.

One elderly audience member told Nu Origins she liked Bus’ music, but forgot what’s her name. She also doesn’t know where to get access to her songs despite owning a Samsung Galaxy phone.