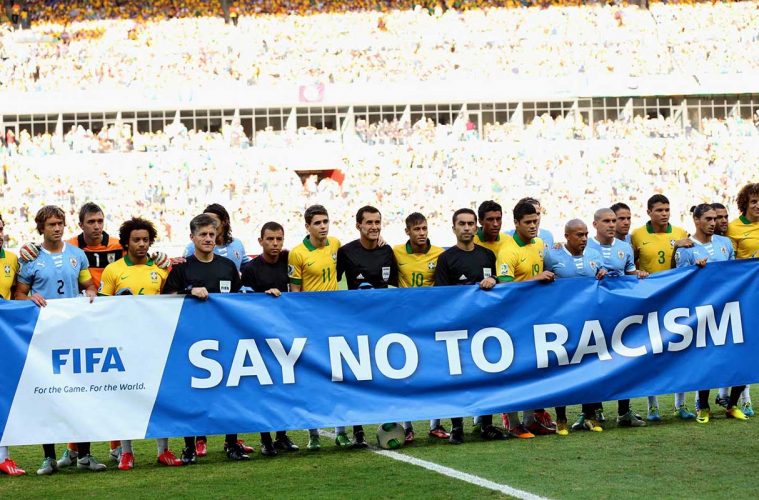 FIFA is adding new disciplinary actions in light of its racism issues.

Any racist remark or gesture made from FIFA players will result in the players getting banned from 10 games.

This is double the number of games previously applied.

Victims of racism may be allowed to address offensive players in statements at disciplinary hearings.

Racism in international football, it’s also known as soccer, is higher than any other sport. With soccer is a global event, it burdened by hateful rhetoric directed at the athletes seems least expected.

Whether it be Mo Salah from Egypt or Son Heung-Min from South Korea, Soccer gives diverse players an opportunity to be international stars as oppose to other sports.

But the problem still remains, the players of color face racism despite being internationally recognized stars.

Europe, as progressive as it is in many areas, is incredibly stagnant in this specific department. European countries have accepted refugees from other areas of the world with open arms, and seem to be ahead of the rest of the world with many of their social policies.

In sports, particularly soccer, fans are too often chanting racist remarks towards players of color.

Between throwing banana peels at players and hooting monkey noises at them, it is unacceptable.

A number of players have been caught in the middle of this issue, including Raheem Sterling and Moise Kean. The worst part about this situation is FIFA’s lack of intervention regarding racism in soccer.

Raheem Sterling is someone who has experienced his fair share of racism during his career.

During a 5-1 victory against Montenegro, Sterling was being racially abused by fans who chanted monkey noises towards him. In response, he cupped his earstowards the silenced fans, telling them to “get an education.” Sterling would later blame the media for perpetuating these stereotypeson Twitter.

Sterling has a point about education.

Racism is borne from ignorance and lack of information; if everyone is educated about the topic, then it won’t be a problem.

Often times, it isn’t people’s lack of access, but rather a lack of willingness to educate and adapt themselves.

During this entire process, Sterling has become the unofficial spokesperson for all socer players of color across Europe. His activity has been truly inspiring, and people look to him any time a racial issue arises.

Budding Juventus forward Moise Kean was subjected to racist chants by rival side Cagliari. Cagliari’s own players begged the fans to stop, as it was truly sickening to hear and to watch. Kean scored a goal to seal the game at 2-0, and proceeded to stare at the fans while raising his arms, as if to say “Are you not entertained?” For a teenager to have the discipline to respond in the way he did and not let emotions get the best of him is truly remarkable

What’s troubling about this particular situation is that Juventus’ captain, Leonardo Bonucci, actually chided Kean afterwards for his celebration, placing the blame 50/50 on the fans and Kean. Rather than backing his own player, Bonucci defends the very fans who shouted monkey chants at Kean’s every touch, and claimed that it was the players responsibility to not be provoked. This is the root of the problem— not only do players and officials within FIFA not do anything, some actually chastise players for speaking out and firing back.

FIFA started the “Say No to Racism” campaign a few years back in an effort to help curb discrimination, but there have been little results. The official website claims that there is a three step procedure that allows referees to suspend the match and even abandon it if the discrimination doesn’t stop, but there haven’t been any matches abandoned.

The lack of accountability is disturbing to say the least. FIFA can issue statements of backing for these players who are abused all they want, but it doesn’t actually do anything.

These procedures actually need to be implemented and encouraged to use. If the fans want to be racist, then they lose their right to a soccer match— it’s that simple. And if the match isn’t stopped, then the team can walk off the pitch and forfeit the match, exactly what AC Milan did back in 2013. The match is not bigger than the issue— soccer itself is not bigger than the issue.

It’s truly a shame that there are fans who will cheer for their own players of color when they score a goal, yet throw banana peels and create racist chants at opposing players. Let’s hope it stops soon, so we can all enjoy the game of soccer that we all love so much.