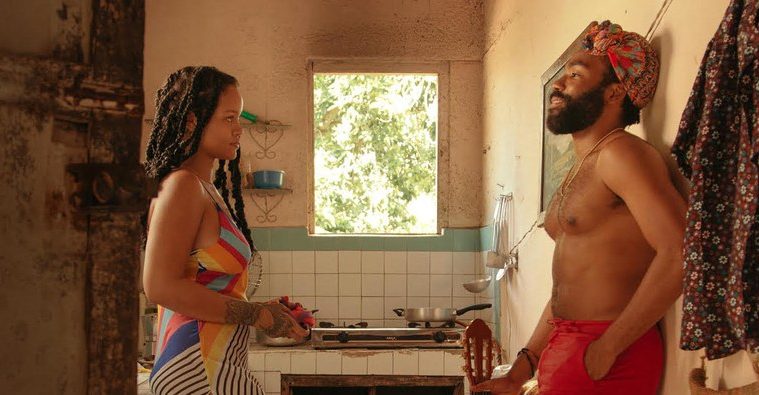 “Guava Island” is a beautiful film about how music can fuel a revolution.

This film stars Donald Glover and Rihanna as a couple on the beautiful Caribbean island called Guava. The islands main source of income comes from importing a beautiful rare type of blue silk. We learn at the beginning of the film that the occupants there are forced to harvest the silk for a company called Red’s Cargo. The natives hate working for Red due to how harsh and cruel he is because he doesn’t give them any days off. As the natives attempt to find a way to still have their festival we see how Glover’s character, Deni, will do anything to ensure that he can give his community the joy it deserves. Throughout the entirety of the film, we can see Deni and Kofi’s, brought to vibrant life by Rihanna, love for each other flourish as they attempt to save their country through music.

The director of this beautifully illustrated film is Hiro Murai. For those who don’t know, he has directed a variety of music videos for people such as Glover’s alter ego Childish Gambino, Earl Sweatshirt and The Fray. He was most recently nominated for an Emmy for the episode he directed called Teddy Perkins which is part of the show “Atlanta”.

While many believed that Glover and Rihanna were creating an album, as they are known for being worldwide musical superstars, no one actually guessed that a film was in the process. “Guava” was first introduced to the public after Glover’s Coachella set on April 10.

im going to be showing “Guava Island!” on saturday for free after my performance.

He had the first screening at Coachella and also tweeted that people could view it on Amazon prime. Not only does the film display a beautiful message but it possesses beautiful cinematography. From them filming on the breathtaking island of Cuba to the soundtrack that has unreleased Childish Gambino music, the film was an overall success.

In a recent interview, Rihanna commented on the process of creating this film, “@childishgambino you are a true gem to the culture. I’m so proud of you and the work you put into making this film.”

wow! the response to #GuavaIsland has been quite overwhelming. So happy you guys felt the beauty in this film! @donaldglover you are a true gem to the culture. I’m so proud of you and the work you put into making this film. I felt how close this was to you and your entire team! pic.twitter.com/7hVx57PPJe

“Guava” demonstrates what can happen when people come together for a common cause and how the arts and especially can unite us all. If you haven’t seen it yet, it is a film worth viewing for all the amazing component it offers and experiences the beautiful story that Guava Island has to offer.