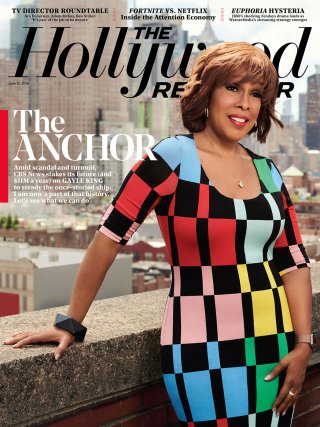 Gayle King on Becoming the Face of ‘CBS News’

Gayle King has had a momentous few months in a career that is still reaching new heights in the aftermath of becoming the face of CBS News.

“I am now a part of that history. Let’s see what we do,” King told The Hollywood Reporter in their latest cover story published Wednesday.

The veteran anchor signed an $11 million deal with CBS, double the amount of her previous salary, to remain on the network. Her two year contract was set to expire in November. Friends said that King was feeling restless to leave but her March interview with beleaguered R&B singer R. Kelly really made CBS take notice.

Susan Zirinsky, president of CBS News, was particularly impressed with how King handled her herself.  Kelly has been accused of sexual assault against children and became belligerent during the interview with King. She maintained her composure throughout and offered a motherly “Robert” to calm him.

“In this melee of histrionics, she did not lose the story — the accusations, the judicial ramifications, these kids, their parents,” Zirinsky said. “She was able to maintain editorial clarity in a situation that would have unnerved the best. And I just thought … Wow,” Zirinsky said.

King said it was a perfect storm of events working in her favor.

“It’s not like I planned it — like, ‘I’m in contract negotiations, I need to try to do something here,’ ” King says. “It didn’t work like that. But I am not naive. It couldn’t have come at a better time for me. It’s just one of those things. Thank you, Jesus, whoever that is,” she said.

'CBS This Morning' anchor @GayleKing recalls the best feedback she got from her famous #RKelly interview https://t.co/LGY7hAnAoa pic.twitter.com/nYOQXRYUcX

Our very own @GayleKing was featured in the @washingtonpost as "what the culture needs right now." ✨ https://t.co/NMKhLmOWAF pic.twitter.com/sQ4NFvnJ0c

She is now the central focus of CBS News alongside anchors Anthony Mason and Tony Dokoupil. Norah O’Donnell, who used to anchor alongside her in the mornings, will be moving to CBS Evening News in July.

The positioning is one that comes after the company experienced sexual harassment scandals involving former CEO Leslie Moonves and anchor Charlie Rose in addition to racial discrimination charges.

“My morale was never in the toilet,” King said. “I knew that, ‘Houston, we have a problem.’ But that didn’t consume me. I just thought, ‘What can we do to make this right?’ “

However, ratings continued to erode. CBS This Morning was losing viewers to Good Morning America and Today. King wondered to Zirinsky if she were the right person for a relaunch.

“I was lamenting, ‘This is so hard because now we’re starting from scratch,’ ” King said. “She stopped me mid-sentence and said, ‘I can’t let you say that, because we’re not starting from scratch. You have to understand what we have built here. Don’t lose focus of that.’ “

Gayle King made it clear that Zirinsky’s efforts were why she was still at CBS.

“No, I would not. I had other things that were interesting to me, and I was giving them serious consideration. But I believe in her and I think she believes in me. Let’s just start with that,” she said.