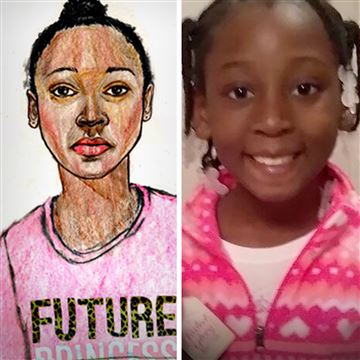 The body of a Black girl that was found in a duffel bag on March 5 near a Los Angeles-area hiking has been identified as Trinity Love Jones and two persons of interests have been arrested in connection to her death.

NBC News reported that the The Los Angeles County Sheriff’s Department said the county coroner identified the young girl. The manner of death was determined to be a homicide but not specified. Two arrests were made Sunday but no further information was provided.

Jones’ death became national news after she was discovered by maintenance workers near an equestrian and hiking trail in Hacienda Heights, California. Authorities released a sketch of her  a long-sleeved pink shirt that said “future princess hero” and gray pants with pandas on them. The public was asked to come forward with any information. Such stars as director Ava DuVernay amplified the message.

Antonio Jones told NBC Los Angeles that he was the 9 -year-old’s father. He described her as being full of life.

“She was just the best — full of character, full of love, full of joy,” he said.

He wanted justice for his little girl.