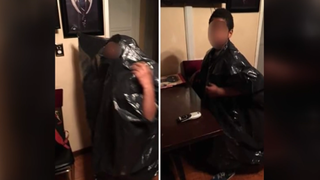 A Los Angeles mother has claimed that her 8-year-old son was forced to pee in a trashcan in front of classmates and then wear a garbage bag to cover his wet clothes.

Sonia Mongol spoke at a press conference on March 8 outside the Gramercy Park school and described what she alleged happened to her son who is in the third grade. He is a student at Manhattan Elementary School at 18520 W. 96th Street. She accused the staff of repeatedly refusing to let the boy use the bathroom and then sought to embarrass him.

“There are children who are committing suicide because they are bullied for less than what has happened to our son,” Mongol said.

Mongol said the incident with her child took place the week prior, The boy told his teacher he needed to urinate and could no longer hold it in. He was then told to use a trashcan.

“He’s a little kid. Why would you make a child expose himself in front of the classroom and then put a garbage bag on him when he came to you for help?” she said.

Mongol then said that her son splashed urine on himself and sought help from a teacher and nurse. The upset mother claimed that no one from the family was contacted and a trash bag was instead place on her son. He was then teased by other students.

“There are four adults on his emergency card. Not one was notified,” she said.

Mongol called for the resignation of at least four staff members at the elementary school. In response, the Los Angeles Unified School District  said that an investigation was underway and released a statement.

“Los Angeles Unified takes all matters concerning the safety and well-being of our students very seriously. Upon learning about this allegation, law enforcement was notified immediately, and the District is fully cooperating in the investigation. The District will also conduct an administrative investigation. Due to confidentiality laws, we cannot offer further details at this time,” the statement read.

Mongol said that she is seeking legal counsel and would remove her child from Manhattan Elementary.

“I know what it’s like to not want to go to school. A lot of times when you’re a kid, no one takes you seriously,” she said.