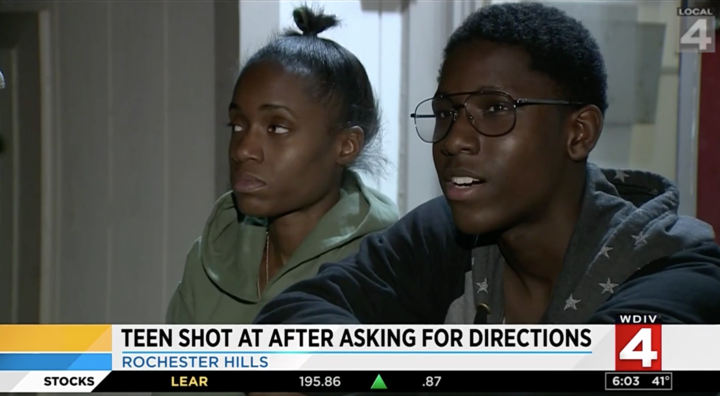 When 14-year-old Brennan Walker missed his bus on Thursday morning and started walking to school, he thought knocking on a door to ask for directions would help. He didn’t think it would nearly get him shot.

The Rochester Hills, Michigan, teenager attempted to trace the bus route on foot after he said he woke up late and missed the bus. Brennan didn’t have a phone with him because his mother had taken it away as punishment, as moms of teens are wont to do, and he got lost along the way.

When he approached a house to ask for directions, he was met with a gun.

“I got to the house, and I knocked on the lady’s door. Then she started yelling at me and she was like, ‘Why are you trying to break into my house?’ I was trying to explain to her that I was trying to get directions to Rochester High,” Brennan told Fox 2 Detroit.

“And she kept yelling at me. Then the guy came downstairs, and he grabbed the gun. I saw it and started to run. And that’s when I heard the gunshot.”

“My mom says that black boys get shot because sometimes they don’t look their age, and I don’t look my age. I’m 14, but I don’t look 14. I’m kind of happy that, like, I didn’t become a statistic,” said Brennan.

Local police said they could not justify what happened to the teenager.

Oakland County Sheriff Michael Bouchard told Click on Detroit that the shooting was “completely unacceptable on every level.”

“I don’t know how you would justify it, but it certainly doesn’t pass the muster,” the sheriff said.

Brennan’s mother, Lisa Wright, wants the man who shot at her son to face charges and believes that what happened “definitely was a hate crime.”

The house had a Ring doorbell, which according to Fox 2 Detroit recorded the incident. Investigators let Wright and her son see the video.

“One of the things that stands out, that probably angers me the most is, while I was watching the tape, you can hear the wife say, ‘Why did these people choose my house?’” Wright said.

“Who are ‘these people’? And that set me off. I didn’t want to believe it was what it appeared to look like. When I heard her say that, it was like, ‘But it is [what it looks like],’” the mother said.

Many on social media have remarked on what happened to Brennan, with some noting this is what it means to be black in America.

Guns cause tragedies because they are the most efficient tool we have for converting bigotry, fear and anger into death. This kid was lucky.

He shouldn’t have had to be lucky. https://t.co/68OcSezgLI

Renisha McBride died like this. In a way, so did Jonathan Ferrell. Now, Brennan Walker knocks on a neighbor's door asking for directions and is nearly killed by a homeowner who shot at him. "Your son almost became a hashtag," a reporter told Brennan's mom. https://t.co/Pcr4wTgU2s

Oh you know, just trying to kill a black kid for asking for directions to his school. Just totally normal homeowner stuff.https://t.co/GF1FXWVY1O

The man who shot at Brennan is currently in custody and expected to face charges.