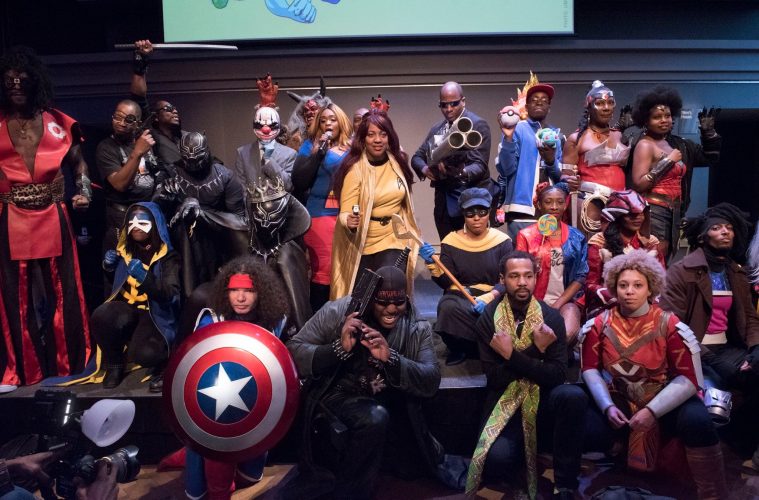 Often children are growing up in urban areas of the inner city lack a variety of healthy role models, and instead many succumb to the negative influence of drug dealers while others become enamored by rappers and other entertainers. Some idolize athletes then there are those whose heroes are capped crusaders and can leap tall buildings in a single bound.

This past Sunday, the Brooklyn Academy of Music (BAM) hosted the Black Comix Expo. Free to the public many people of all colors and backgrounds came together sharing a common interest: a love and passion for comic books, art, and cosplay.

With the craze surrounding the highly anticipated premiere of Marvel’s Black Panther, the expo reminiscent of Comic-Con featured dozens of Black comic book artists and writers with their work on display. All of the presentations featured original, little-known superheroes of color, a rarity in mainstream comics and film.

The expo featured many cosplayers dressed as some of their favorite iconic comic book, cartoon, and anime characters such as Ash Ketchum from Pokémon, Blade, and Nubia, the black Wonder Women who took up the mantle after Diana Prince. Other activities included the Children’s Art Workshop, where children got to draw some of their favorite superheroes. The highlight of the expo was the roundtable discussion dubbed “Defenders of Justice.”

The panel featured comic book writers Tony Medina, Kwanza Osajyefo of Brooklyn, and non-fiction writer Darnell L. Moore, moderated by the founder of the Black Comics Collective, Deirdre Hollman. The discussion centered on what Black superheroes like Black Panther and others mean to Black youth and Black culture.

Having been a lover of comic books growing up, Osajyefo wanted to become a comic book writer himself. As he started getting older and having worked for Marvel comics for over ten years, he began to notice and grew dissatisfied with the absence of characters that looked like him in the stories he would read.

“My dream as a child was to tell stories..but also being a child I was very naive to the fact that my face wasn’t in the fiction that I was reading,” said Osajyefo.

Moore also touched on the importance of making messages that resonate with the youth being paramount to making an impact.

When asked about the release of Black Panther’s ultimate impact on the Black Comic Book Industry/Culture, which is more significant than anybody would have thought, Roye Okupe, Co-Founder/CEO of YouNeek Studios, said that it creates “Opportunity for creators of color producing similar content. Hopefully.” Let’s hope that these new-found opportunities assist in letting our Black youth know that they are the real superheroes, which seems to encompass the primary benefit of Black Superheroes. There’s no need to seek externally, like so many of our youth make a habit of, good or bad.