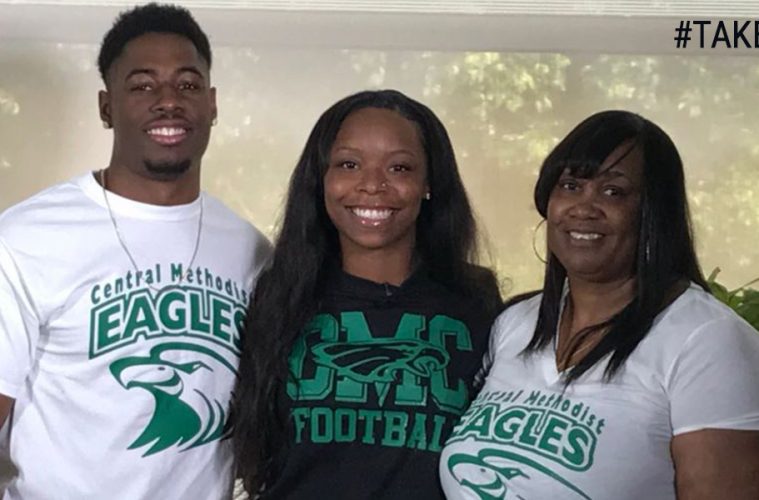 College football has been a male-dominated sport since its creation in 1869. Women such as Becca Longo and Shelby Osborne were among the first to integrate the sport but were not on full scholarships. That’s about to change with Antoinette “Toni” Harris who is the first female athlete to receive a full collegiate football scholarship and be a non-kicker. She will have her college debut this Fall at Central Methodist University, an NAIA school in Fayette, Missouri.

From an early age, Harris had set her goal of one day playing in the NFL, specifically for the Seattle Seahawks. This dream was almost cut short when she first started playing football and was kicked off the team for being female, but through her incredible work ethic she is doing everything she can to get there. Due to her talents at Redford Union High School and East Los Angeles College as a safety, she received five full scholarships.

Such a cry baby but I’m ready for my new journey @CMUEaglesFB ! #FL19HTCREW #TakeFlight 🦅 pic.twitter.com/Evz2YPEyIn

Prior to her announcing her commitment to Central Methodist University, many people learned about Harris due to her being the subject of a Toyota Superbowl ad. In the commercial she talked about how many people doubted her but one by one she overcame them all. Following an interview with Good Morning America, Seattle Seahawks head coach Pete Carroll, gave her a shoutout and told her he’s going to be keeping an eye on her.

The 5’7 safety from Detroit, Michigan has had to overcome many obstacles in her life. As a child, she was placed in foster care and moved around until she was adopted at 13. At 18 she was diagnosed with Ovarian cancer and even though she beat cancer, she had to face a new task; getting back in shape for the upcoming season. During treatment, Harris lost over half of her body weight and once she was fully cured, she set her sights on getting healthy. She is truly a testament to never let anyone tell you what you can’t achieve.

“A coach told me nobody’s ever going to play you to be at the next level. In the end, you’ve got to push yourself,’ she said in an interview with ESPN, explaining how she learned how to self motivate and was able to achieve her goals.

Harris is inspiring younger generations to go after what they want, no matter what barriers are set in place. According to the United States Department of Education, women comprised 56 percent of students on college campuses around the nation in the Fall of 2018. Interestingly, there are more men participating in NCAA sports, while there are only 216,378 women currently playing sports in the NCAA. What is shocking is that even though there are more NCAA sponsored women sports teams, football only has male athletes.

For high-school players, women like Longo and Harris are inspirations. More females high-school players are excelling and are being recognized for doing so. High-schoolers such as Holly Neher who threw a touchdown pass in Florida and made headlines as the first girl known to do so in state history. These women are inspiring others to not only play the game in high school but to attempt to play it in college as well.

As football pre camp begins in August and the season in September, all eyes will be on the newest safety as she begins her first season at Central Methodist University. She is truly remarkable and we all cannot wait to see what barrier she breaks next.