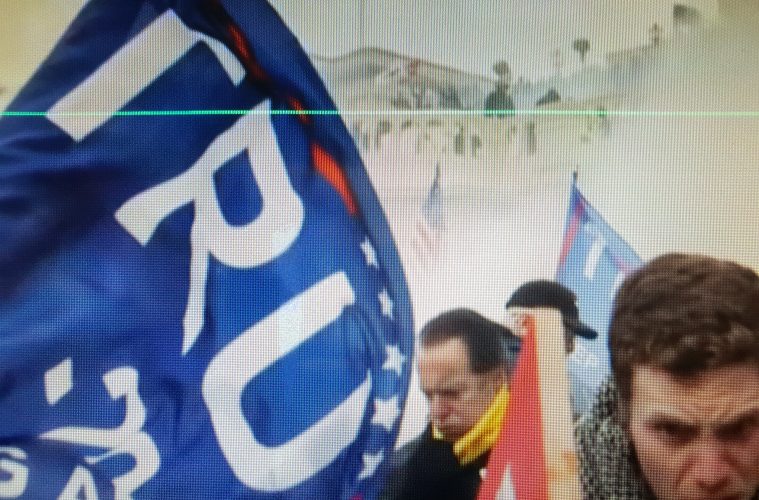 America’s white domestic terrorists lay siege to the US capitol

White domestic terrorists turned up at the capitol on January 6th, 2021 to send an unequivocal message to America.   This is our America.  This is our capital city.  We get to select the President. The response  from those charged with protecting the capitol. A resouding unequivocal reaponse. We are with you. We witnessed the police opening the gates for the mob. Taking selfies with the mob and enabling the anarchy. Make no mistake the 6th January will go down in the history books as the 2021 uprising. Not since 1814, when British troops stormed into Washington and set fire to the capitol has America seen such insurrection at the seat of electoral power. The leader of the insurrection was the 45th President of the United States Donald J  Trump. His racism and facism coddled by the media with lazy narratives suggesting Trump’s actions are fuelled by  dementia, greed, dumbness and any other pejorative term they can think of. The criticism is  used to mask the truth  that Trump was elected for one reason and one reason only – white supremacy. He is an avowed white supremacist sympathiser.

Donald Trump told the Proud Boys in the presidential debate to ‘stand back and standby’ this was a call to arms. The white electorate response – to Trumps dallince with far right white nationalists- this is our guy.  Those who supported a white supremacist leader were not only the confederate flag waving right wing but also left wing populists who pretended that Trump was not a bad option and somehow flirting with facism will make the union stronger.  The throughline is clear. Trumps cult like followers know he lost, they simply do not think that they are subject tot eh same laws as everyone else.  As they made their way from a the ‘Save America Rally’ they signalled there intention.

The mob were radicalised white domestic terrorists not an old dying generation of white people, they were from differing white demographics Baby boomers, Gen Z and Millennials.  They were spurred on and encouraged not just by Donald Trump but by the  140 elected  Republicans who wanted to strike out the votes of African Americans from cities all across America. They were in the process of performing their own act of sedition objecting to the electoral votes  from key states with large black populations claiming their election was rife with corruption and fraud simply translated ‘too many Black people voted’  The plan was to object to the certification of the vote for Georgia, Arizona, Nevada, Michigan and Pennsylvania.

The mob was what Trump promised and the images beamed acrosss the world raised international concern. An armed facsist  insurrection in the most powerful nation in the world was stupefying.

As demographic change moves America towards a more pluralistic society, the backlash against the erosion of white power led by elected republicans, a plurality of white voters  and fermented by a relentless openly racist rightwing media ecosystem: From Fox News, News Max and OAN, fermenting the flames of white rage. There is an argument for the radicalisation of white economically disadvantaged individuals by the right-wing American media ecosystem.

But what we saw was white fear – the  storming of  the capital at the behest of whiteness was beamed around the world. Black people warned America about ‘Trumpism’ they understood the sloganeering ‘MAGA’ just like the  ‘Save America March Rally’ was a call to arms.  America’s hate marched to the capital, incited by  Trump but not fooled by Trump. They were using each other in service of whiteness.

The insurrection shows what Black people have long argued. The police parted the way for the rioters to enter the capital. Even after the proud boys marched in Washington and caused mayhem.  Trump signalled the “Save America March Rally” was going to march on the capital. What preparations were made for the march? Why did the police take such a gentle approach to the mob? Where were the tanks? Remember the Black lives matter marches. The water cannons, the violent arrests. It is difficult to juxtapose  images of young armed white domestic terrorists like  Dylan Roof and Kyle Rittenhouse being arrested non violently after committing massacres with  the now familiar narrative parroted by police when killing black men/boys who are trying to  comply with their instructions “we shot in self defence” “ I was afraid for my life”  Who you fear it is clear is a social construct and it seems the police do not fear armed, murderous white men.

Less than a week into 2021, we’re witnessing one of the most serious political crises of US bourgeois democracy in its history. The storming of the US Capitol confirms that the crisis of US capitalism and its ruling institutions will only deepen. (1/3) pic.twitter.com/fRnxDJXvYQ

The forgotten man and women was a narrative framed by both left and right, economic poverty gave absolution to poor white racists and was put forward by fake and real populists alike.  To be clear poverty is a form of economic violence and damages societies from within . Poverty fueled by corporate  greed is a scourge – but Trumps cult followers  saw the tax cuts for the rich and they were fine. COVID deaths – fine.  They are racists plain and simple.

America needs to speak to the masses of white people –  poor , rich and inbetween and help break the chains of white supremacist ideolgy that has captured them.

When Donald Trump supporters arrived at the steps of the capitol , they were there to overthrow democracy, they were there to ensure that Donald Trump remained in power.  Trump’s final parting shot at the end of his rally “Today is not the end it’s just the beginning” was not an idol threat but a promissory note from a discredited leader who has had more than four years to gin up his troops. Emboldening white supremacy is a dangerous game and what Trump has unleashed will not easily be put back in the box.  After the mayhem and triumphalism of the mob takeover of the capitol and the sight of  elected officials sprawled across the floor cowering not knowing who was approaching them and what lay behind the door. After the mob successfully trashed  the capitol  halting the certification of the election. Trump requested that the white supremacist mob go home but not without expressing his enduring gratitude and respect for the mob “we love you, you are very special” they went home with the blessing of the President and the Police.  This is Trump’s America.

From @YouGov poll: among Republican voters, 45% approve of the storming of Capitol, 30% think the perpetrators are 'patriots', 52% think Biden is at least partly to blame for it, and 85% think it would be inappropriate to remove Trump from office after this. This is not a fringe. pic.twitter.com/Kiysi8lyp1