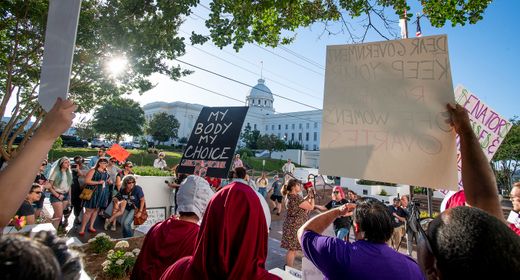 Alabama lawmakers voted to effectively ban abortion in the state Tuesday, setting up a constitutional challenge that will make its way to the Supreme Court.

The  Alabama Human Life Protection Act will make abortions a felony, including rape and incest. It will be punishable up to 99 years in prison for girls, women and their doctors. The conservative-led Senate ended debate on the bill after more than 4 ½ hours.

“You just aborted and you raped the state of Alabama,” Sen. Minority Leader Bobby Singleton railed at his Republican colleagues after the vote against the amendment. “All of you should be put in jail for this abortion that you just laid on the state of Alabama. This is just a shame. This is a disgrace. It is a travesty.”

Gov. Kay Ivey, a Republican,  is expected to sign it into law. The ban will not take effect immediately and supporters have readily acknowledged that this measure is expected to prompt a response from the  U.S. Supreme Court. In 1973, the high court decided Roe vs. Wade which granted women the right to have an abortion.

However, in recent years, the Supreme Court has shifted right. The appointments of Justices Neil M. Gorsuch and Brett M. Kavanaugh have made it appear that the landmark ruling could be reversed. As such, states such as Alabama, Mississippi, and Georgia have introduced bills to restrict abortions at six weeks before women know they are pregnant or outlaw the procedure entirely, to provoke a court challenge that would bring Roe vs. Wade back under consideration.

Singleton appeared on CNN Wednesday morning and condemned the actions of his colleagues.

As the Alabama Senate passed a near-total abortion ban, State Sen. Bobby Singleton says he spoke out against it because of his daughters.

If one of them had to look at a “rapist in the face for the rest of her life, I just couldn't take it as a father.” https://t.co/ZR3frk56wc pic.twitter.com/WXolM2zn6Q

“I think that we raped women last night. We made women of Alabama the model of the new Roe vs. Wade. I think this is a horrible bill,” Singleton said.

The state senator added that the bill was not just to challenge the standing ruling but also punitive. He argued that Republicans did not want to imprison those who sought abortions and performed them.

“I asked to sponsor that just last night, you know, is that your intent to send doctors to jail for 99 years, or even for an attempted abortion up to 10 years in prison for attempt, not defining what an attempt is? But, you know, they just look me in my eyes with a stare as if, ‘yes, thats what I want to do.'”

Legal challenges have already been promised to block the bill from moving forward as other politicians and groups have come out against it.

The ACLU of Alabama, along with the National @ACLU and @PPFA, will file a lawsuit to stop this unconstitutional ban and protect every woman’s right to make her own choice about her healthcare, her body, and her future. #alpolitics