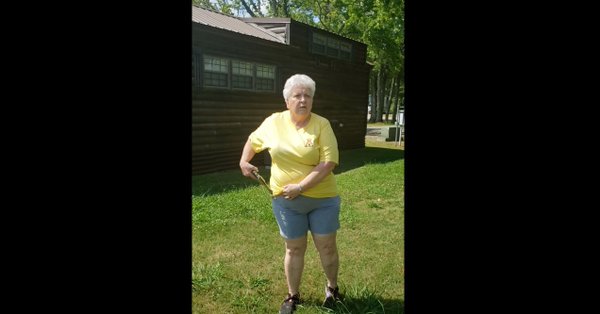 A white woman has been fired after she pulled a gun on a Black couple that were enjoying a Memorial Day picnic with their dog at a Mississippi campground.

'You can't be out here': The shocking moment a white woman pulls a gun on a black couple at a Mississippi campground who were trying to have a picnic by a lake with their dog

Employee pulls gun on black couple at park and tells them to leave https://t.co/mFyKJo8eR8 pic.twitter.com/ZdMCEfHRLE

Jessica, 26, and Franklin Richardson, 28, of Starkville, Mississippi visited Oktibbeha County Lake to enjoy a Memorial Day picnic with their dog Sunday. They were confronted by a property manager Ruby Howell who trained a gun on the couple. This white woman claimed they were trespassing on private property owned by Starkville Kampgrounds of America (KOA).

“Well I’m just telling you, you need to leave,” Howell said in the video, “this is under private ownership…you cannot be here. KOA won’t let you.”

Jessica began to film the encounter in case something fatal happened and it would be on record. She shared the now viral clip on social media and explained what happened.

“Racism is alive and well!! Today was a beautiful day so my husband (who’s a vet), our 2-year-old dog, and myself, decided to Google a lake to visit and have a picnic. We found a lake located in starkville and decided to visit. Not five mins later a truck pulls up and a white lady screams at us, she then jumps out of her truck with a Gun. And proceeded to point it at the 3 of us, simply because we didn’t make reservations…” she wrote on Facebook.

Jessica continued that reservations weren’t needed to be at the lake. Nonetheless, she and her husband would have left if simply asked but Howell escalated the situation.

Her husband Franklin is a a military sergeant and told Yahoo Lifestyle he witnessed Howell driving towards them. The couple were simply unpacking the car when she confronted them.

“I could see a gun in her hand at the wheel,” he said. “She stopped and pointed it at us.”

The couple further claimed Howell yelled ““Git! Git!” as if they were “stray dogs on her porch.”

KOA confirmed that Howell was fired as a result of the May 26 incident.

“Kampgrounds of America does not condone the use of a firearm in any manner on our properties or those owned and operated by our franchisees. The employee involved in the incident has been relieved of her duties at the Starkville KOA,” the statement read.