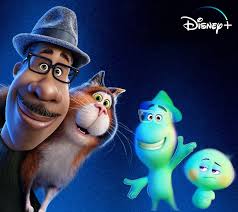 The Duality of Disney-Pixar’s film Soul

I heard this story about a fish. He swims up to an older fish and says: “I’m trying to find this thing they call the ocean.” “The ocean?” the older fish says, “that’s what you’re in right now.” “This”, says the young fish, “this is water. What I want is the ocean!”

This sat with me while the movie bumbled on. What I’m searching for is that I have or what I want is what I need? Soul, the Pixar-Disney movie released this past week, has held the world by their desires and questioned what we all thought we once easily knew. This film plays on existentialism and brings to life humanity’s most daunting thoughts of purpose with colorful and realistic animations. Through the free therapy enlisted in the script, something ugly was still hiding beneath this film: cinematography’s slippery slope into racialized troupes.

This isn’t an attack on the film. I highly regarded the poignant messages of enjoying life for what it’s worth, and that the rise and grind bustle isn’t the only mission. The journey is also mad important. However, failing to analyze the ways this film adds to the tired critics of Black-centered films doesn’t serve any purpose. So, let’s take a deeper look. The most obvious trope was the Black protagonist turning into a non-human character. This was seen in Princess and the frog where Princess Tiana was a frog most of this movie. Joey, the main character of Soul, was a soul for most of the movie, having him die off pretty early in the film. Yes, he died, not even a weird transformation, but definitely dead. While I understand him being dead was critical to the plot of the movie, it’s the principle that this troupe continues to happen and Black characters never get as much camera time just being Black. It’s always black and something else. Black and bird, Black and frog, Black and mystical hypothetical.

A common mention in today’s think-pieces is the white savior complex. I have to agree and disagree. My agreement comes from this troupe of people using indigenous spiritual rituals in fun, white and palpable ways. During the film, Joey is trying to return to earth and needs to find a way. Moonwind, a white hippie in the real world, and his band of others show him their way of getting lost souls back to their bodies. In doing so, they use African beats and instrumentation with clear ancestral ritual dances to create this thin spot between the spiritual and reality. Something that was once gawked at and ridiculed as uncouth by American society is now dressed up for a white demographic as a cool hippie thing when it’s culturally sacred. It’s easy to say that this is supposed to be a light-hearted film yada yada yada, but if you’re going to take these serious topics and find enjoyable ways to engage critical thinking, it shouldn’t be difficult to find a way to incorporate more accuracy in something sacred like those rituals.

What I do disagree with is Tina Fey’s character, 22, as being a white savior. Yes, Tina Fey is notoriously known for dawning white-savior-esque in everything she’s associated with but her role, I believe, goes beyond her. The idea that this movie takes place in metaphysical space obviously denounces this idea of race, at least in this specific instance. These souls aren’t tied to anybody. 22’s first occurrence is I the great before, so before anyone is born to any creed or sanction. This defeats 22 being a white savior because she isn’t saving anyone, and she doesn’t do any saving besides forfeiting her life because she feels she doesn’t deserve to live (dark shit, I know). Joey does save 22, in a sense, by correcting the way it was initially intended, landing a second chance at life. I actually believe the writers didn’t show where 22 ended up on purpose because it isn’t focused on our position in life, the literal point of the movie. If anything, it shows how hard it is to remove individual experiences from the big picture. This movie is about interpersonal stories and journeys, and while our outer experience is valid and deserves accurate representation, this moves further than that. We have to see it for all it’s worth and it’s the duality of importance and ignorance.