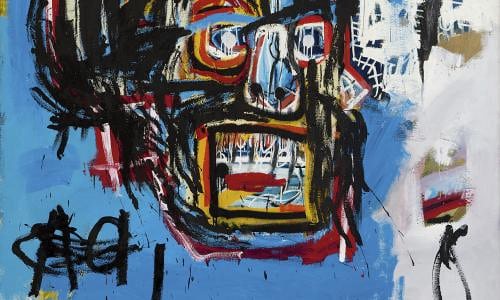 The Brooklyn Museum presents Untitled, an exhibit inspired by Jean-Michel Basquiat’s famous 1982 painting. Commemorating one of his most critically acclaimed paintings and his rapid rise to fame, Untitled will be the first exhibit in the One Basquiat, one of the centerpieces of the museums programming dedicated to his legacy for Black History Month.

According to a press release, Untitled is, “emblematic of his early success and ranks among the artist’s most powerful paintings.” The exhibit will be presented by collector Yusaku Maezawa, following a tour, Untitled will be housed in a museum Maezawa in his hometown of Chiba Japan.

“I am thrilled to be sending Basquiat’s masterpiece home to Brooklyn,” said Maezawa, “I hope that through the exhibition…the young people of the borough will be inspired by their local hero, just as he has inspired so many of us around the world.”

“We are extremely grateful for Mr. Maezawa’s generosity and for this tremendous opportunity to present this stunning painting in Basquiat’s hometown,” said Anne Pasternak, the Brooklyn Museums Shelby White, and Leon Levy Director, as she describes the long history between Basquiat and the Brooklyn Museum.  “One Basquiat is the continuation of a relationship the Museum has had with the life and art of Jean-Michel Basquiat, from his early visits as a child to our recent exhibitions.”

Born and raised in Brooklyn, Basquiat attended City-As-School, an alternative high school with cultural institutions around New York, where he developed a character called SAMO. Under this moniker, he achieved underground recognition by spray-painting sayings on walls in Lower Manhattan.

His first solo exhibition came at Annina Nosei Gallery in 1982, where he became one of the youngest artists ever to take part in the Whitney Biennial in 1983. He was also included in the inaugural reopening exhibition at the newly expanded Museum of Modern Art in 1984.

“In the single decade of Basquiat’s artistic career, he went from spray painting witty, cryptic aphorisms on the street to being an international art star whose paintings were highly coveted by collectors,” said Eugenie Tsai, the One Basquiat organizer and John and Barbara Vogelstein Senior Curator of Contemporary Art.

The work will be on view in the Museum’s Robert E. Blum Gallery from January 26 through March 11.