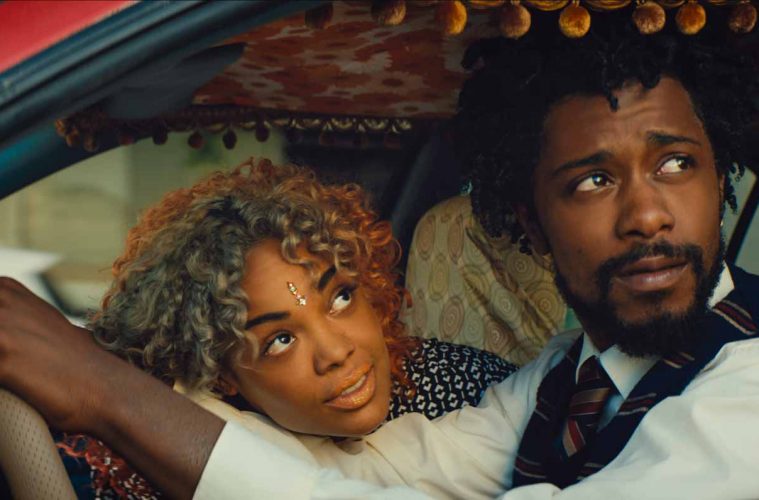 How Bothersome was Sorry To Bother You

“Sorry to Bother You.”, is in no doubt summer 2018’s greatest film surprise. Writer/Director Boots Riley brings an exciting minority casted proactive film to life with lots of humor and with relief, no cross dressing men. The film is creatively, visually and narratively amazing.

Cassius “Cash” Green (Lakeith Stanfield) is a young struggling man desperate for a job living in his uncle Sergio’s (Terry Crews) garage with artist girlfriend (Tessa Thompson). After lying and showing skills in deception during an interview, Cash surprisingly lands a job as a telemarketer at a company called RegalView. At first Cash is having trouble making sales to customers, but then an older coworker gies him the advice to use his “white voice” while selling which lands Cash much success getting promoted to a “Power Caller”.

Before Cash’s promotion, he had joined a union led by his coworker Squeeze (Steven Yeun) to rally for raises. After the promotion a bit of tension is created towards Cash, his best friend Salvador (Jermaine Fowler) and Detroit, being that they all worked there and joined the union together. While working in the Power Caller Suite, Cash learns that RegalView sales human labor from Worryfree, a company that offers a life free of worry from paying bills, free food, and room and board, with just the exchange of a lifetime contract of working. As Cash gains more and more success his relationships fall apart as his friends and girlfriend show worry about his morality. Without spoiling much, the movie takes an unexpected turn when Cash is invited to a party with Steve Lift, the CEO of Worryfree and attends a meeting with him afterwards ending in unwanted horseplay. 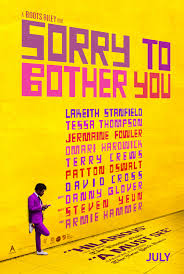 Sorry to Bother You movie poster

The movie in short, wants to bother you. It’s metaphors for issues on capitalism are thought provoking while also touching on the issues of being black in a system to favor white people. Getting ahead means leaving a part of yourself behind and switching code is the norm to become a favorite in white corporate America. Also what’s questioned is the initial willingness to become part of a system to earn money and be considered a hard worker despite all of the obstacles. The movie continuously balances its serious moments with hilarity as in one scene Cash and Salvador are raising their voices at each other in an argument about Cash’s promotion. Clearly angry, they are yelling at each other to have a nice day and continue yelling compliments and well wishes rather than insults.

While many films are touching on black issues, “Sorry to Bother You” has its own personality and is very disingenuous. Riley’s film is visionary with a strong point of view on sociopolitical topics. It’s boldly executed not straying too far from bizarre or weird, more so delving into it to prove a point. While not for all film goers, “Sorry to Bother You” lives up to the indie film hype and everyone who views it will leave the theater wondering about it’s message.