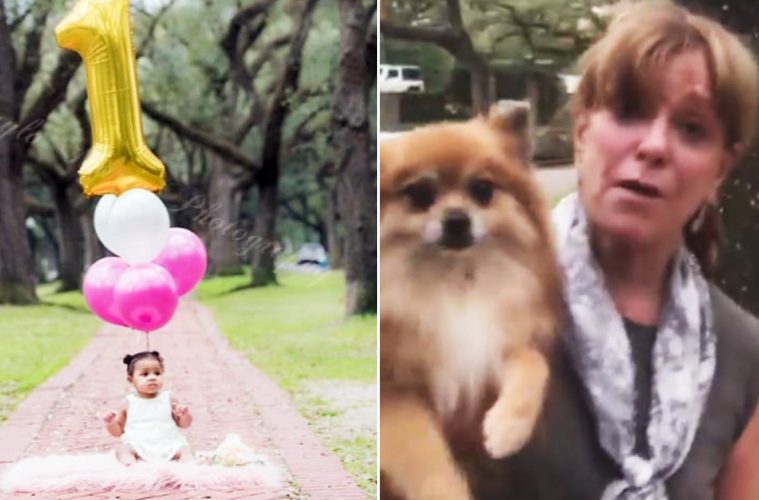 Franci Neely, a socialite, yelled at a Black family staging a birthday shoot for their 1-year-old daughter last Saturday.

Inside Edition reported Tuesday how Kelyn and Isaiah Allen of Texas were celebrating their toddler’s birthday. The couple had blankets and balloons set up of daughter Anja. During the photo shoot, Neely became upset that it had been set up in the middle of the sidewalk and became verbally abusive. At one point, she hit Isaiah who was holding the camera.

Anja can be heard crying during the commotion.

Kelyn was just as frustrated.

“I was very angry and I felt extremely disrespected,” she said.

The City of Houston considers the sidewalk as considered public property and as such, the Allen’s were not breaking any laws. Neely, who reportedly got $30 million from her ex Jim Crane after their divorce, apologized. She sought to deflect some of the blame.

“I am very sorry that I got upset on late Saturday afternoon. […] It’s hard to remain composed when confronted by shouted threats of lawsuits and false, inflammatory accusations,” Neely said in a statement.

Last year, Neely was also involved in another incident in which she harassed others. Mario Montemayor contacted ABC13 to share footage in which Neely confronted his daughter and her friends because they were taking prom photos.

“I still feel violated that someone could just come up to you. They didn’t like where you were. It was a free space. It was disturbing,” Montemayor said. “I don’t think she committed a crime, but she was very rude. I’m not asking for an apology, but it’s disturbing we can’t walk in space.”