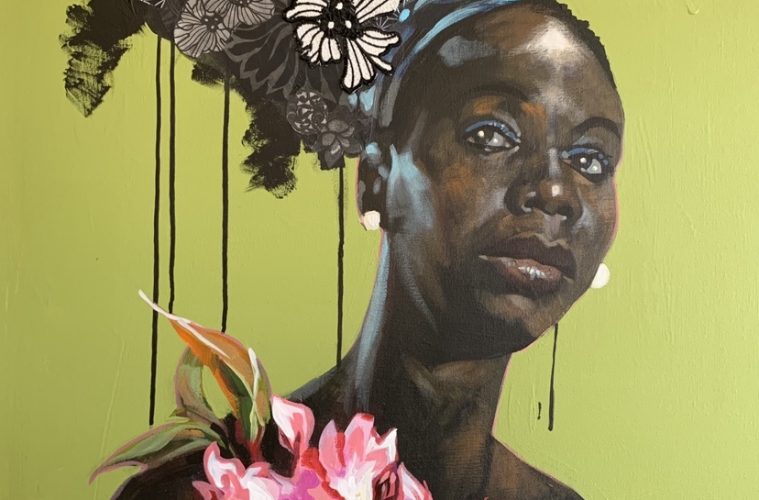 Mackey Twins Art Gallery: A Vision For The People

A vision is essential in order for people to grow. Black art is on the rise and even though it is something that has always been a part of the culture, it has not shone as bright in largely known galleries or museums. The Mackey Twins Gallery set in Mount Vernon is breaking these boundaries by representing black art that empowers and enlightens those who don’t necessarily understand why it can be important to collect art. 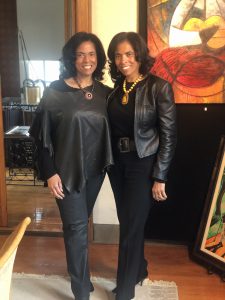 When walking into the Mackey Twins’ home, you are immediately greeted with conviviality and warmth. It is like entering into a book full of history, wonders, and colors, but most importantly familiarity. The gallery holds art pieces of highly acknowledged colored artists. One of them is the late Elizabeth Catlett, who had a whole section of the gallery dedicated to her in respect to her work. Her art pieces connect the similar struggles and traditions of the black and Hispanics / Latino communities, especially when it came to the women. She was an activist and politically vocal through her art when it came to women’s rights, which eventually led to her arrest and her being banned from returning to the US once she moved to Mexico. “El Abrazo” (The Embrace), one of her hand sculpted pieces cut out of one block of red Mahogany, is one of her masterpieces being sold at the Mackey Twins Gallery. The twins were specially authorized by Catlett’s son to sell and represent her work. Other artists represented at their gallery includes Leroy Campbell, James Denmark, Charly Palmer, Xenobia Bailey, and landscape artist, Magno Laracuente. 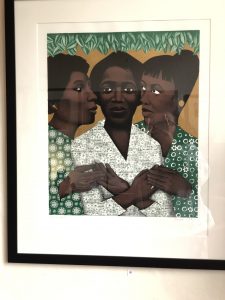 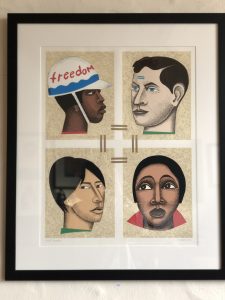 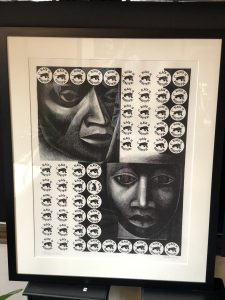 Every art piece had a unique story, and when it was presented by Sharon and Karen Mackey, all you would want to do is listen and cherish the moment. When in front of the twins one simply can not say no to their positive energy and mastery in opening your heart to the art in front of you. You will feel personally connected to whichever piece your eyes fall upon, when at the Mackey Twins Gallery. Their interest in black art began back in their careers as high school teachers. They noticed that there wasn’t enough of people “who looked like us” in the books they taught. “We saw a lot of our culture missing,” one of them stated, “So we started visiting galleries owned by black people.” Their desire to collect was hindered by the fact that they didn’t have the budget. Eventually, they found a gallery who gave them the option to go on payment plans, and that’s how they took off. Their first show was with Leroy Campbell, afterwards, they started getting more attention from the public. Soon Campbell, who developed a good friendship with the twins, and introduced them to his friend and fellow artist, James Denmark. This led into their second show with Denmark, and the business snowballed from there.

When it comes to collecting new pieces the twins claim that they don’t look at just the art but the artist. “We collect art that we love and the business is about the art that we love.” They explain. When meeting new artists and building a relationship, they never start out with business talk, sometimes it never comes up. “It’s a pretty tremendous synergy,” the twins explained. Both parties get to know each other personally and talk about what they love. “It’s not sales talk. We love the work and we love them. This is not just a business, it’s a family now.”

On the artists’ point of views, Denmark, was in North Carolina at the time the twins reached out to him. He is based and from NYC, so when he heard about the opportunity to go back into the city for a home show with the twins, he took it. Soon after their relationship took off. “They are committed to doing this. A non-verbal commitment.”

He proclaims, “It brings us closer together.” As far as Denmark’s vision in art, he focuses on the positive things in the black community like love, theatre, spirituality, dancing, and marriages. Mainly stories from the Harlem Renaissance. His works give viewers a chance to experience the stories of our past and bright culture. 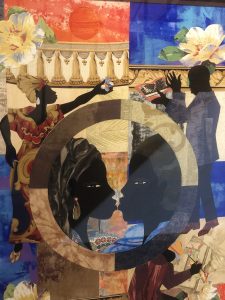 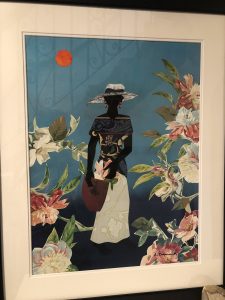 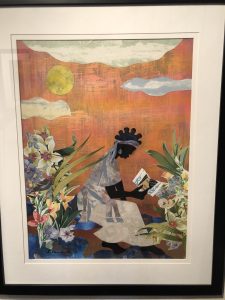 Charlie Palmer, fine art painter, was also introduced to the twins through Leroy Campbell. He has been doing one exhibit a year with them for 10 years. “It wasn’t about doing business with them, it was about meeting them.” He says. “It was so organic and natural. When we got to doing our first show, I don’t even know how it happened.” Palmer explained how artists can tend to be protective over their work and rightfully so, yet he describes how doing a show with the Mackey Twins was different. “It was almost like a gathering of friends. Patrons became friends.” When asked on his vision for his art, Palmer explains how he also doesn’t harp on the negative side of things. He says black history contains enough of that. “What can I do to move beyond that story of struggle?” Palmer pondered. Palmer’s art embellishes the beauty of black people as something to be adored. “There’s no need to explain, justify, or defend. Just to acknowledge.” 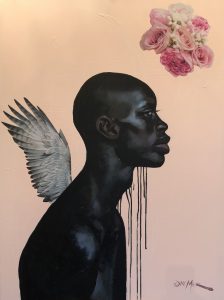 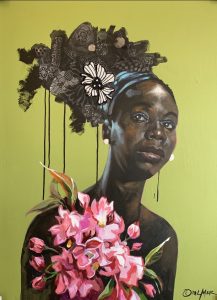 The Mackey Twins takes on these visions of artists, making it their duty to expose it to others. “Art preserves our culture. It is also legacy building because these are works that you are going to leave to family members when you are not here anymore.” They said. So when a person collects or is thinking of buying, it is important to remember that without a vision the people perish. Art can transform a room and is a conversation piece for those who see it. The twins also explain how their mission is to educate.

For example, when presenting Ruth Miller’s six years crocheted masterpiece, “Tea Cup Fishing”, the twins explain its story of how the black girl in the boat is so busy fishing in a teacup, she can’t see the ocean of opportunity around. She is expecting so little, and we should want more out of life. It’s messages and art pieces like that which keeps the Mackey Twins Gallery high on the radar for black art. So for those who want to buy or start collecting themselves, the twins offer payment plans for those who do not have the budget. The twins conclude by saying, “We have to preserve our culture. We have to be responsible in doing that.” 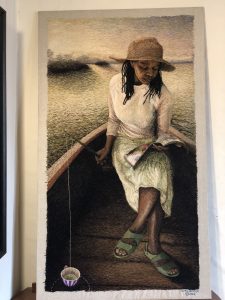