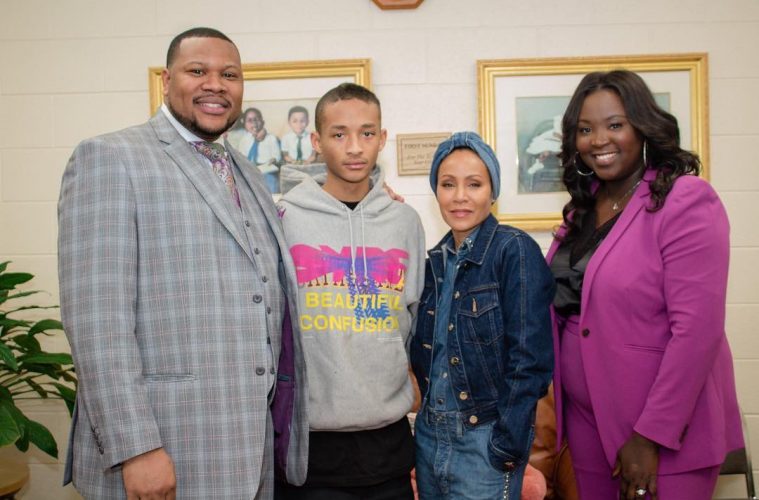 Jaden Smith and First Trinity Missionary Baptist Church are working together to deploy a mobile water filtration system known as “The Water Box” that reduces lead and other potential contaminants.

The church and Smith worked together to design and engineer the system. Smith, along with his mother Jada Pinkett Smith and his partners at JUST Water and 501CThree visited First Trinity Saturday  to present the residents of Flint, Michigan with the Water Box. It has the ability to fill a 5-gallon jug in 30 seconds. Trinity has given out more than 5 million bottles of water  but donations have been on the decline.

“We don’t want to disrupt what’s happening with the donation of bottled water to Flint,” Smith said. “We just want to be the backbone in case something happens to that supply of donated bottled water.”

Smith wanted to help with the grassroots effort to bring relief. Flint has been a point of crisis ever since lead tainted waster was discovered in 2014. Lead began leaking from pipes after the city tapped the Flint River for drinking water without properly treating it to reduce corrosion.

“This has been one of the most rewarding and educational experiences for me personally,” Smith said.

“Working together with people in the community experiencing the problems and design something to help them has been a journey i will never forget. We are planning to deploy more water boxes in Flint and other communities facing similar challenges.”

Pinkett Smith has also pledged her support and praised her son for taking the initiative with this endeavor. She expressed being proud of him.

Catrina Tillman, a spokesperson for the church, stated that First Trinity has been at the forefront of this issue by donating almost 30,000 bottles weekly. The Water Box would continue to help the covenant service its congregation and community at large. At times, there have simply not been enough to give and this would be a compliment to what they are already doing.