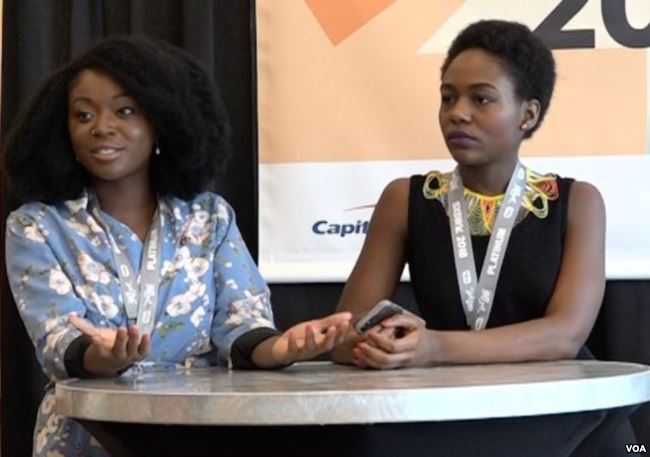 Afua Osei says… ‘Anyone Can Play a Role’ in African Innovation

AUSTIN, TEXAS —
While working for a big consulting firm in Lagos, Nigeria, Afua Osei repeatedly encountered women who wanted to advance professionally but didn’t know how. They needed guidance and mentoring.

So, Osei and her colleague Yasmin Belo-Osagie started She Leads Africa, a digital media company offering advice, information, training and networking opportunities to help “young African women achieve their professional dreams,” according to the website.

Launched in 2014, it now has an online community of over 300,000 in at least 35 countries in Africa and throughout the diaspora.

“I didn’t plan to be an entrepreneur,” Osei said this month at South by Southwest (SXSW), an annual festival of music, film and tech innovation.

Anyone can be an innovator, Osei said in an interview, after co-hosting a meetup on starting and investing in African businesses. “You don’t have to look a certain way. It’s not just for one type of person. Anybody can play a role, and there is so much work to be done.”

The Ghana-born entrepreneur — who grew up in metropolitan Washington, D.C., and once worked for first lady Michelle Obama — has lived in Nigeria for roughly five years. From there, she sees “so many opportunities and potentials in Africa to innovate and help improve people’s lives.”

The continent has some fast-growing economies — including Nigeria, Ghana and Ethiopia — and the world’s fastest-growing population. With more than 1.2 billion people, it’s projected to top 2.2 billion by 2050. At least 26 African countries are likely to double their current populations by then, the United Nations reports.

Africa also holds challenges for entrepreneurs, from finding funding to untangling bureaucratic red tape, Osei acknowledged. “Dealing with polices and governments can be hard. Also, distributions: How can I get a product that I made in Lagos out here to Austin?”

But, Osei insisted, “Every single challenge and opportunity also presents a space for an innovator and entrepreneur to solve that problem.”

She Leads Africa deals with problem-solving. In its first year, the company started the SLA Accelerator, a three-month development program to assist female-led startups in Nigeria. It gives entrepreneurs business training and opportunities to meet potential investors.

Entrepreneur Cherae Robinson won a spot in the accelerator program’s first year — and $10,000 in seed money to start a specialty travel company. Now called Tastemakers Africa, it has a mobile app to help users “find and buy hip experiences on the continent.”

The mentorship “provided a wealth of knowledge I did not have,” said Robinson, a 33-year-old New York native living in Johannesburg, South Africa. “I was a few months into developing the model. She Leads Africa helped us not only refine the model, but it continues to be a source I can tap into. They continue to support the entrepreneurs in their network.”

She Leads Africa recently began working with a New York-based Ghanaian-German designer and fashion blogger who goes by the single name Kukua. She started africaboutik, an online store of modern African designs.

“At Africa-themed events in NYC [New York City], I see a lot of so-called ‘Made in Africa’ items that are 100 percent made in Beijing,” Kukua wrote in an Instagram post. With SLA’s help, she’s identifying new textiles and designers in Africa to change the fashion narrative.

“The frustrating thing about many textiles and even accessories that initially are made on the African continent are that so many are now made in China. … Even if you are in Accra or Nairobi you can easily come across products made in China. At Africa-themed events in NYC, I see a lot of so-called “Made in Africa” items that are 100% made in Beijing.” … Visit SheLeadsAfrica.org to learn more about @africaboutik and her thoughts on fashion entrepreneurship in Africa.

“It is important for technology leaders to take the lead and be innovative in the way we communicate to government, because they [government staff] are learning as much as we are,” Osei told VOA.

Osei and Belo-Osagie are learning through She Leads Africa, and their efforts have drawn recognition. Forbes magazine named them among “the 20 Youngest Power Women in Africa” in 2014.

They don’t plan to slow down, Osei said, noting their goal is at least 1 million subscribers for their website. As the site says, it’s for “the ladies who want to build million-dollar companies, lead corporate organizations and crush it as leaders.”

Story By Tigist Geme via Voice of America