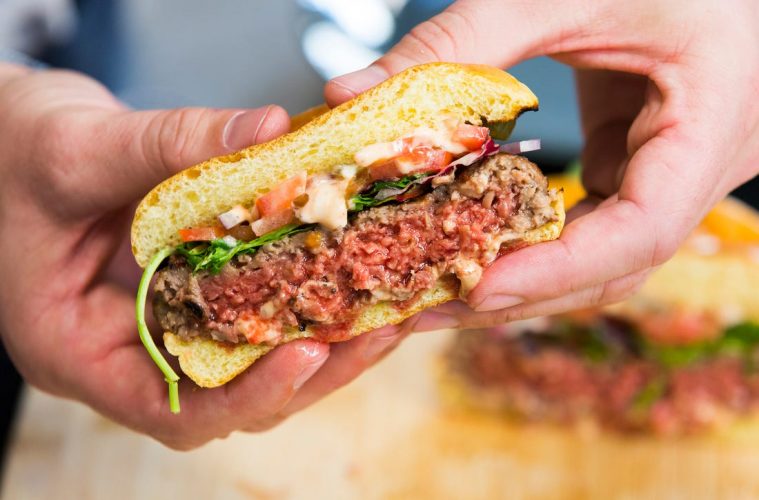 Did You Know There is Cancer in Your “Impossible Burger”?!

Many things have changed for people who are now giving their best effort to living a healthier lifestyle. Now more than ever, we know it’s important to take a closer look at what we put inside our bodies. If your trying to live a healthier lifestyle without meat that I’m here to tell you eating vegan-yet-processed meat substitutes should not be your main solution from staying away from fried chicken or beef burgers. Foods such as vegan sandwich meat, vegan chicken strips, and vegan burgers are okay in moderation, but can be just as unhealthy as meat.

The Impossible Burger Team has been growing in popularity among the veggie-burger or faux meat industry. The Impossible Burger is on a higher-level when resembling the texture and taste of animal meat products. Apart from its “meaty” texture the plantbased-burger has the ability to “bleed” with the help of the “Heme” of the beet juice in the ingredients. The burger is also made with soy, a vegan substance that has been debated about its health risks in human consumption. 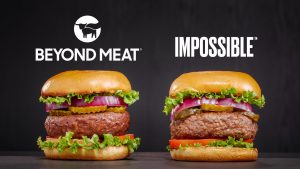 It is the “meaty” combination of taste and texture that contributes to the surge in popularity of the vegan Impossible Burger. In fact, big corporations like Burger King are releasing their Impossible Burger products to communities around the world! Some would argue that Burger King is offering alternatives to meat is a good thing. Wouldn’t Impossible Burgers lead to a healthier lifestyle? Well let’s take a closer look.

Well, it all starts with a brave man named Dewayne Johnson, an African American man dying from cancer because he ate food exposed to RoundUp, a herbicide sprayed on plants and seeds since the 1990s, which the corporation Monsanto deemed as safe. According to Guardian News, Dewayne Johnson “was the first person to take Monsanto to trial on allegations that the global seed and chemical company spent decades hiding the cancer risks of its herbicide. He is also the first to win. The groundbreaking verdict further stated that Monsanto “acted with malice” and knew or should have known that its chemicals were “dangerous”. Wouldn’t a man dying from cancer, who wins a $300 million dollar lawsuit, be enough to ban Glyphosate from our foods? Unfortunately, not.

Regrettably this isn’t the only product with glyphosate that is sold in communities around the nation. According to Moms Across America, glyphosate is allowed on 160 non-organic food and feed crops by the EPA. Glyphosate is found in popular cereals like Cheerios, in vaccines like the MMR and HepB and even used on some feminine hygiene products like tampons.

Its easy for a multi-million dollar corporation to hire “experts on data” to prove their lies and claims that the well known carcinogen, Glyphospate, is safe for human consumption. But it is not impossible for them to hide the truth, when the fact is men like Dewayne Johnson and thousands of others are dying from the food-like substances they produce for humans to eat. With this in mind-people should reduce the amount of processed foods (vegan and meat) until you  are not reliant upon them at all. Do your research on restaurants and recipes that include whole organic foods for a healthier and happier life.

Check out my video below for more on this story:

A closer look a popular foods: Don’t forget processed Faux meats are transitional foods to bridge the time you find #WholeFoodPlantBased options 🔥✊🏾💡READ WHY: •••• •• Ty 🔥✊🏾 @beyondveganllc ・・・ The Burger King Whopper is the new plant based thing people are trying out! So ask yourself: Why do you want to go plant based? To be healthy, right? To eat foods that are least detrimental to your health and well-being, right? So it is necessary for you to know what you’re eating and understand what you are putting in your body, right? So let’s look at the ingredients in the impossible Whopper at Burger King. Nah, let’s just cut to the chase and look at the controversial words about the Impossible Burger, “Heme” “GMO” “Soy” “Glyphosate” “Roundup” But let’s laser focus in on the “glyphosate” 1). Impossible Foods does not hide the fact that the Impossible Burger contains genetically modified (GMO) ingredients like soy leghemoglobin and soy protein. Although, most scientists agree that GMO foods are safe. However, some are concerned about the use of GMO crops that are resistant to commonly used herbicides like glyphosate and Dichlorophenoxyacetic acid. So what is glyphosate? Glyphosate is the key ingredient in Roundup. You remember the recent lawsuit decision of an African American man name, Dewayne Johnson who was a school ground keeper who won a $289 million lawsuit against the company because the juror found that glyphosate caused his cancer? So we see that Glyphosate has been linked to potentially harmful effects on humans, plants, and animals, leading many experts to demand further research on the possible hazards of this herbicide to both humans and the environment. For example, glyphosate has been CONT’D in comments 👇🏾👇🏾👇🏾👇🏾 #EatToThrive #GrandRising #CancerCausing #ImpossibleBurger #glyphosate #ImpossibleWhopper #ImpossibleMeats #HEME #Monsanto #FuckMonsanto #processedfood #AfricanDiaspora #AfricanHolisticHealth #Soy#AlkalineWater #AlkalineFoods #BetterThanIWasYesterday #PhilsFoodFact Friday’s and more!