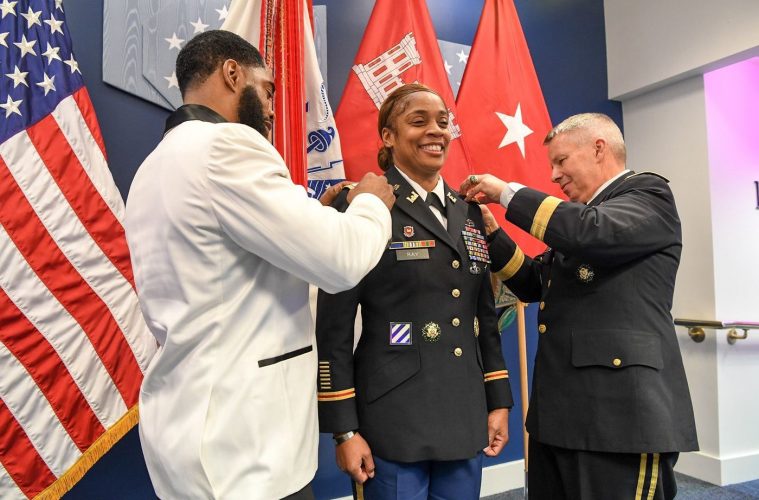 Colonel Lynn Ray joined a select group in the active duty Army when she was promoted to full colonel earlier this month.

Ray, a North Philadelphia native, has a 31-year career in the military where she has served in Panama, Kosovo, Afghanistan, Kuwait, and Iraq. Ray was also chosen to be an Army legislative liaison officer for the U.S. Senate, planning trips abroad for congressional members. In 1998, Ray was the officer in charge of 54 soldiers with the U.S. Army’s 27th Engineer Battalion, who worked as carpenters, plumbers, electricians, and stone masons for the Airborne unit. Under her leadership, they transformed a cluttered field in Port-au-Prince, Haiti into a school.

“It felt so good to be able to do something,” she said. “It was a turning point in my life.”

On April 4, she was given the distinction of full colonel, a promotion that very few women receive. Women make up 11 percent of all colonels and African American women just two percent.  Her new role will be as Chief of Readiness with the European Command in Stuttgart, Germany.

Ray told The Philadelphia Inquirer Sunday that her Philly roots led to this point in her life. In particular, she recalled being a student at The Philadelphia High School for Girls. The college prep school encourages girls to be leaders of tomorrow.

“They made sure you understood you could do anything,” she said.

Ray attended now Tuskegee University in Alabama after graduating Girls High. She enlisted in the U.S. Army to pay for her student loans. She soon found herself jumping out of airplanes.

“I loved it,” she said. “It hit all the things that made me feel good about being in this country.”

Brig. Gen. Kevin D. Admiral met Ray in 2015.  They were stationed in Fort Hood, Texas. He said she was a collaborative leader and nicknamed her the Union Boss.

“She wants to ensure everyone feels a part of the team and has buy-in,” he said.

Ray said she would carry Philadelphia in her heart despite being stationed overseas.

“I’m proud to call myself a daughter of the City of Brotherly Love, absolutely,” Ray said. “I wouldn’t change a thing.”